Liz Losh's Guest Blog: Beyond the 99% 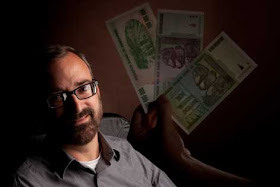 In welcoming participants to the annual research conference for the Institute for Money, Technology & Financial Inclusion, where chocolate coins dotted the reception table, director Bill Maurer noted that the very value of membership in the formal banking system was already being hotly debated by conference participants at dinner the night before conference sessions even began. With the fate of the Euro in jeopardy, people being kicked out of the formal financial system in the developed world, bank protests, consumer rebellions against unfair fees and profit taking, and bank failures too frequent to be worth reporting in the nightly news, Maurer argued that banking the unbanked from the so-called "bottom of the pyramid" of financial life might be a missionary activity increasingly worth examining. Of course, as Maurer also observed, the Institute had always been interested in the many ways that the "end of banking" might be imagined from the apocalyptic to the mundane as a response to perceived crises in the formal economy.

Maurer reminded attendees that this was a conference known for providing a corrective to the just-so stories told by economists about twenty-first-century money as a set of transparent frictionless transactions that could be easily aggregated and numerically abstracted. As Maurer explained, it was a conference intended to draw on the knowledge base of a variety of other disciplines -- including agriculture, anthropology, design, and IT -- to explore material culture and social practices that might otherwise be treated as ephemeral or insignificant. Of course, this conference had welcomed papers in the past on everything that relates to IMTFI from an uncovering of underwear money to accounting with the bodies of dead migrant workers. To acknowledge the fact that the conference often celebrated money as well as studied it, Maurer introduced Catherine Eagleton of the Money Gallery of the British Museum.

Maurer told the story of the founding of the institute, which he traced to his initial experiences at a mobile money workshop at the Federal Reserve, where he apparently thought “now here’s a kind of financial innovation that we can all be excited about.” Although these "bridges to cash" might have been built most rapidly in the case of M-PESA and its 14 million accounts, Maurer asserted that this kind of "entire new business" was most notable because it reopened discussions of "the definition of money itself," which "changed the terms of discussion at moment when we need new terms."

Rather than have U.S. specialists "parachute in" to a given country, IMTFI emphasized funding the research of local and regional experts and suspicion of the tendency to "overuse economists." Maurer explained how there were now 100 researchers working in 50 countries who represented "other kinds of disciplinary training" and an "alternative sets of voices" at a conference that was tolerant of exploratory work that had not yet produced "completed research results" in the interest of facilitating conversation and disseminating new ideas. As Maurer pointed out, there was even "an ethnographer studying us" as a "community of scholars," whose work had already appeared in Critique of Anthropology. (Author Anke Schwittay presented a talk about Kiva last year.)
Liz Losh at 10:23 AM
Share