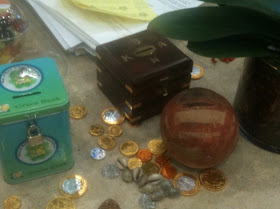 As Director Bill Maurer wrapped up the annual conference about Money, Technology, and Financial Inclusion at UC Irvine, he thanked the Bill & Melinda Gates Foundation and discussed how the donor and aid communities were adapting to collaborations with the investment community. He also said that the profits associated with a "world of fees and commissions" should be understood in relationship to the products and practices of "cultural worlds." Like landlord and tenant relationships, mobile money relationships often do not function with "free agents in an open market," even though ideologies of freedom and openness may be featured in advertising and project reports. Maurer argued that "researching the interface" and developing "different kinds of vocabularies" were important areas for systematic research.

Maurer showed some of the illustrations gathered by Jane Guyer in her project documenting Wikipedia's illustrations of the entry on "Market." Although he showed farmers displaying cabbage and the London corn exchange from Guyer's collection, he argued that conventional representations of a market as a site that sets price through supply and demand was little more than a nostalgic imaginary construction that did little to foster understanding of how mobile money actually operates. As he said, "the world of fees and commissions is coming into contact with a social world with things that look like this but aren't." Instead, he asserted that refugee camps might be the best example of the general concepts discussed at the conference, as the image of a Somali refugee camp replaced the commercial and pastoral images shown earlier. As Maurer put it, "let's pluralize 'the market' into multiple intersecting circuits of finance."

In discussing behavior change around mobile money, Maurer also insisted that it was important not to overlook "the importance of fun and enjoyment," because it was "easy to think of the poor as just having needs and not having desires." He also reminded audience members that "the poor don't aspire to be entrepreneurs necessarily" and encouraged them to think about Melissa Cliver's work on "economies of enoughness."
Liz Losh at 5:05 PM
Share