SIM Registration and Financial Inclusion in the "Silicon Savannah"

In the past few years Kenya has received widespread acclaim as a rising digital power on the African continent. Terms like ‘Silicon Savannah’ are now used to describe the success and excitement around Kenya’s ICT industry, with Safaricom’s M-Pesa leading the way. But this progress did not arise accidentally; it took committed political, bureaucratic and corporate leadership, including the reform of trade, tax and financial rules. Yet new regulations may threaten the success of Kenyan ICT, especially for those most in need of its opportunities. This post explores how one of these new developments - the case of SIM registration - may be inadvertently diminishing the positive aims of mobile phones and financial inclusion (though others, like the drive to shut-off counterfeit phones deserve attention, too).


As of the beginning of 2013, it is illegal to use an unregistered SIM card in Kenya, with violators facing disconnection and the possibility of both a steep fine and multiple years in prison. Kenyan government officials say that the law - which requires mobile users to provide official identity documents to activate a SIM card - is necessary to curb the use of mobile phones in crimes ranging from kidnaping to hate speech. With an upcoming election and fears of violence, the government has been pushing ahead firmly. Unfortunately, the policy change has been marked by confusion: with only a few days to go, compliance was only 80 percent, with one operator reporting as few as 63.7 percent of its subscribers had registered. Operators experienced logistical difficulties getting registration data from remote parts of the country, and The Nation reported that customers were confused about whether mobile money customers (who were already registered due to Know Your Customer laws) would need to register again.

Kenya is not alone in this push. As Aaron Martin and I have documented in a recent paper, in the past 6 years, 48 out of 54 countries in Africa have started requiring the registration of personally identifiable data in order to activate a prepaid SIM card. Given the lack of political opposition and privacy protection across the continent, this significant policy change has received little attention; however, it is likely to limit access to mobile connectivity, raise unaddressed questions about privacy, and indeterminately change the dynamics of financial inclusion. 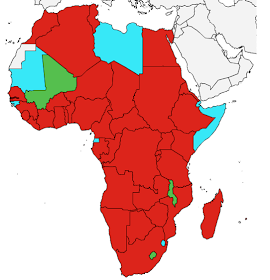 SIM Registration in Africa (Oct. 2012)
Red is required; green is not required; blue is unknown.


At first blush, requiring an identity document to activate a SIM card may not seem particularly onerous. After all, many of us provide more than just an ID to open our mobile accounts. Yet, the reality for many African mobile subscribers is far more difficult. Geographic dispersion and poor infrastructure make travelling to registration outlets a difficulty. More fundamentally, tens of millions of Africans lack formal identity documents, either because they never received them or have lost them over the years. The success of mobile phones in Africa occurred because barriers to entry were lowered to a bare minimum thanks to market competition and business model innovations like prepaid airtime.

Even slightly raising the barrier can prove to be sufficiently exclusionary for millions. Following SIM registration requirements in Zimbabwe, the two leading operators lost two million subscribers. In South Africa, MTN lost (PDF) nearly a million subscriptions and growth for the industry slowed considerably afterward. In the past week in Kenya, more than 1.2 million SIM cards were shut off because they were not registered by the December 31st deadline. While some of these were unused accounts, many more were people who could not - often through no fault of their own - register their SIM cards.

This additional hurdle to mobile connectivity may be a worthwhile trade-off in a legitimate effort to fight crime, yet it’s unclear that this is the case for two reasons. To begin, while governments like Kenya’s justify SIM card registration as a means to curb crime, there is no reliable evidence that these policies lead to a reduction in crime. In countries like South Africa or Nigeria where SIM registration policies are already in effect, pre-registered cards are easily obtained; where that isn’t possible, a criminal could easily use a foreign SIM card on roam. The trouble is compounded because, as our research shows, in many countries, opposition to SIM card registration from politicians, civil society and private industry is ignored. The lack of countervailing power in general means that governments have not had to provide objective, independent evidence of the efficacy of SIM card registration. While rules about identifying communication can certainly be legitimate, the ways in which SIM card registration has occurred often fail to meet desirable standards of democratic policymaking. The result, unfortunately, are new barriers to the positive opportunities of mobile connectivity.

Linkages to the Financial Inclusion Agenda


But what does all this mean for financial inclusion? Here the results are less clear, but a couple of possibilities are emerging. As mentioned above, many mobile network operators (MNOs) have expressed opposition to SIM registration requirements, both because the onus of registration falls upon them and they stand to lose substantial numbers of subscribers. While many MNOs remain opposed, in some cases they are changing their tune. On the one hand, governments have shown their unwillingness to listen to resistance, but, perhaps more importantly, mobile operators have begun to see new business opportunities: the growth of personal identification means MNOs are better able to target their services and sell data to other companies, perhaps making SIM registration profitable.

Already, the CTO of MTN Nigeria is publicly advocating for SIM registration information to link banking, health and driving license data. In Kenya, the operators are using SIM registration as a means to “gain useful insight on prepaid customers [and] develop a more targeted approach to segments of our consumers and entice them to pick post-paid services”. Following SIM registration, Vodacom South Africa was able to increase (PDF) “implementations of direct prepaid campaigns resulting in significant prepaid churn reduction from 48.1% at Q3 2008 to 38.1% at Q3 2009”. This reduction in churn may be complemented by bundling, analyzing and selling transaction data, not unlike Google or, more recently, MasterCard in the United States.

The success of new financial inclusion initiatives such as microloans and insurance is believed to hinge on these new forms of data collection and analysis. The vast majority of Africans lack a formal credit history, meaning that potential lenders are unable to model and manage risk. As Timothy Mwololo detailed at the IMTFI conference in December, already Safaricom is beginning to build credit scores through accessing official and private databases for its M-Shwari micro-banking product (which, incidentally, garnered 1 million users in its first month, already receiving deposits of Ksh 1 billion and issuing credit of KSh 140 million, according to The Star). Other operators are following suit: in September of last year, Airtel announced a partnership to sell insurance in seven countries with South African insurance giant Sanlam.

This is a significant shift from the traditional microfinance model of relying on existing trust and social pressure to ensure repayment. As microfinance evolves towards more individualized and commercial models, including new products such as insurance, “more mainstream financial tools such as credit bureaus and credit scoring are already starting to be used” (Schwittay 2011). As a recent industry report detailed, “there is an opportunity for lenders to chart another path, using increased computing power and new sources of information and data (including mobile phone usage patterns, utility bill payment history, and others) to build better risk models” (Baer et al. 2012). While in some cases this data will be population-level, in many it will be tied directly to individual identity, often through the use of SIM card registration data. For example, one Asian consumer lender “found that delinquencies on mobile phone bills were 60 percent more predictive of eventual small-loan defaults than were delinquencies on loans from other banks. Even the choice of payment plan for the phone bill, a seemingly unimportant variable, was found to be just as predictive as the second-best variable available from the credit bureau” (Baer et al. 2012).

Although it is too early to tell the result of this, there are a number of causes for concern. As Kelly Gates has argued in the American context, aggregating transaction data has been a core aspect of the “financialization” of the U.S. economy. There is reason to believe that SIM registration could come to be a key resource in the finance industry’s effort to define, measure and differentiate populations, with some people being seen as profitable, and others excluded. While there are benefits to improving access to financial services through better data analysis, there is also a more worrying side that requires transparency, consumer empowerment and effective regulation. Is the financial inclusion community ready to address these new issues?

Furthermore, early reports from Kenya suggest that SIM registration is having unintended consequences on mobile competition. Safaricom, which controls more than 60% of the market already, seems to have benefited due to both the existing registration data from M-Pesa customers and their enormous network of M-Pesa agents who are able to register subscribers where others cannot. For example, Martha Nambengele, a rural Kenyan, switched to Safaricom from a rival operator: “As an alternative, I moved to Safaricom which I found easy to register because the M-Pesa kiosk is just a stone-throw-away from my house” compared to the next closest registration location 7km away.

It may be the case that desirable outcomes emerge from SIM card registration - indeed, the exclusion from systems of formal identification often harms the poor who are unable to access important services - but the growing chorus of support for such positives must be complemented by steps to avoid the downsides; in the case of SIM card registration in Africa, this has rarely happened.

As the chaotic start to 2013 in Kenya shows, SIM card registration is not a straightforward process. Nor should it be considered a straightforward policy: much more debate about the consequences (intended and otherwise), as well as new rules about the use of that data, is required, from both the financial inclusion community and elsewhere.
Kevin P. Donovan is a researcher at the University of Cape Town. His IMTFI-sponsored research focuses on biometric identification, mobile phones and privacy within financial inclusion efforts.
Smoki Musaraj at 10:54 AM
Share