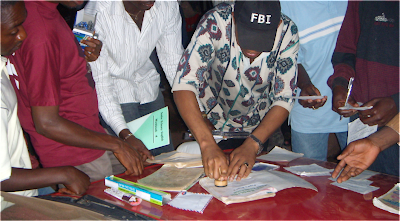 "Njangi Sociality: Mobility, ICTs, and Mobile Money Usages and Practices amongst Poor Rural Farmers in the Cameroon Grasslands" by Francis B. Nyamnjoh and Divine Fuh opened with Fuh telling a dramatic personal story about his own challenges growing up in rural Africa.  He described buying a cell phone for his mother and how it became a symbol of their evolving relationship, as he pursued higher education and an academic career.  As mobile phones became popular, he also saw his mother's life  begin to change, as she explored new economic opportunities, and this context brought to his scholarship an interest in "agency, precarity, sustainably, resilience." In collaborating with Nyamnjoh, he also described the importance of interdependence and intersubjectivity in their work, as they tried to capture the role of group interests and collective agendas.

His account included "communities of social conviviality" and their concern for school children needing support.  It was a narrative that included sales in the market, negotiations with police officers, patterns of consumption, and "how very young men build different kinds of interdependent relationships."  He placed these experiences in the framework of what Patrick Chabal has called "the politics of suffering and smiling."  In mapping out the vulnerabilities of the "ICT & Finance R-evolution," he noted that farmers without access to banking facilities were often shut out by structures that excluded his own grandmother and others with a need for formal papers. He argued that it was critical for researchers to think about being "not just interested in productivity" but also "how they defend cultural practices." 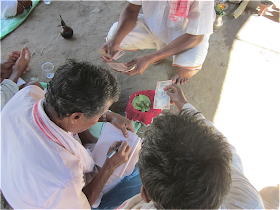 Sean Dowdy began his talk about "How 'the Poor' Account: Financial Reckoning and its Cosmoeconomics in Assam, India" by noting the fact that like the previous speaker he "also grew up on a farm," although his own relationship across distance with his family was vexed by "the post office and its inefficiencies."  In thinking about the IMTFI paradigm broadly to include "things that may not appear economic at all," such as spiritual and material prosperity dictated by the rules of gift and barter in a multiethnic community in the Mayong Kingdom, a fully functioning kingdom that is also known as a "country of black magic" in which being "poor" should be considered "in scare quotes," because the systems of "how they count" includes reckoning drawn from cosmology and relationships with powerful non-human entities in the group's understanding of "the shared account."

Dowdy demarcated the features of a Mayong worldview that was comparable to the following phrase from Heraclitus in its orientation: "Although the account is shared, most men live as though their thinking was a private possession." In this long view of reckoning known in Assam as "Hisāb Kore," the memory techniques of such cosmological accounting were analogous to tracing back to the mark of "footprint" at the beginning of history.  This form of reckoning had no double entry, but there were procedures for verification, because the shared account -- unlike "secret accounts" designed to protect against sorcery and accusations of witchcraft -- could be publicly audited and debated by the community. This belief system relied on the foundational assumption of a "transparency" of other minds, which constituted a kind of "telepathic ethics" where "even secret accounts are mired by a general social audit," because "others can manipulate your thoughts, your objects of value," so that "your thoughts and actions do not belong to you."

According to Dowdy, the work of reckoning is also "a form of making the cosmos legible, manageable, and prosperous."  He described concepts such as "the fine," which could be applied to cases of incest, and "sharing fifty-fifty."  He explained how the custom of giving the female offspring of an animal to a family in need on the assumption that the female offspring of those offspring would be eventually returned to the donor might result in an infinite deferral, as animals kept being given to the most needy parties rather than the parties "owed" as antecedents.  Dowdy also argued that these behaviors could be analyzed with the concept of ontography developed by Martin Holbraad.  (You can see a pop culture manifestation of ontography discussed by Ian Bogost here.)  In closing, he noted that languages that had the same word for "poor" and "sad" actually opened up the possibility for differences between those terms by placing them in opposition. 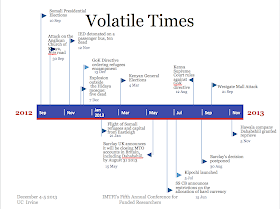 The case study on "Contingency Routes: Somali Financial Flows and Transnational Spaces between Kenya and Uganda" by Gianluca Iazzolino and Thomas Molony showed how researchers had to be resourceful when field sites turned into conflict zones.  Researchers were often "kicked out" by informants for asking questions that they didn't want to answer.  Iazzolino explained how their research that looked at "flows of people" and "flows of money" had been disrupted by several geopolitical events, including the attack on the Westgate shopping mall in Nairobi.   Although formal financial services structured by partnerships between financial institutions and telecommunications infrastructure providers, such as M-Pesa, were the "bread and butter of people working in this field," Iazzolino and Molony wanted to explore the triangle of "financial infrastructures," "livelihoods," and "mobility" without relying on trite financial inclusion narratives, so they chose to think about how mobility might range from acquiring a foreign passport to fleeing as a refugee for Somalis along the "Eastleigh-Kisenyi" corridor that spans from "Little Mogadishu" in Kenya to similar settlements in the slums of Kisenyi in Uganda. 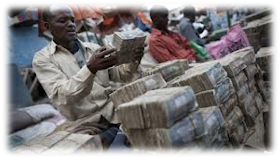 With the stabilization of Somalia, the country's citizens were also exploring potentially lucrative business opportunities in South Sudan, but "volatile times affected decision-making," and the the denizens of the corridor were faced with the possibility that U.S. currency might be limited only to banks and that global finance giant Barclay's might punish Dahabshiil for providing "Hawala" transfers of large amounts of cash with no ID required in a low interest credit/debt system that might fund terrorism as easily as family obligations.  Of course, since Hawala is a "set of practices" rather than a formal business enterprise with a corporate identity, it could never be shut down.

Iazzolino described the corridor as a place of "low-end globalization" that also demonstrated the viability of the "south-south networks" described by Gordon Mathews.  If transactions were "safe" and "private," there could be both pros for women and cons for elders trying to enforce social norms.  In charting out Hawala/M-Pesa relations, rather than envisioning replacement, Iazzolino described an "informal inter-operability" of cash advances and cash floats including quick loans from relatives that might be preferable to formal market exchanges.  The constellation of participants that he enumerated included market wholesalers, proprietors of various businessses, money vendors, investors, and post agents.  He observed that there were both "gendered values" in which mobile money was considered to be "closer to women and school children" and a "temporal axis" that even included "turning aid money into business money."  The emphasis for Somalis was always on "portability," from wearable gold for women to livestock that could cross borders and boundaries for men.

Discussant Olufunmilayo B. Arewa of UC Irvine asked how technology figured into the accounting process and into social networks if financial reckoning was imagined broadly.  She also moderated discussion in the question and answer session about the question of inclusion and what Dowdy called the "means to share."  In the collective conversation Iazzolino claimed that distinction between formal and informal "not very useful in the empirical realm."  One audience member described it as a panel about "family, community, and sharing" and the concepts of morality that might differ from narratives of development or financial policing.
Liz Losh at 10:52 PM
Share