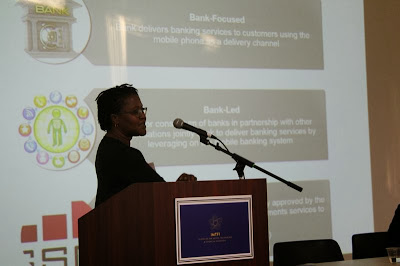 In introducing the final panel of the day, IMTFI director Bill Maurer pointed out that the institute quickly realized that mobile money wasn't "just about banking but about payments," and he closed the session by noting that "rich" could just mean older or of a more elevated class, after a day's discussion that included the role of "dark money."

The presentations on financial inclusion and mobile money uptake began with "Mobile Money Utility and Financial Inclusion: Insights from Unbanked Poor End-Users" by Lite Nartey and Olayinka David-West.  Nartey returned to the "importance of interdisciplinarity" as a conference theme by way of introducing herself as a researcher from "the business side" and the an advocate for the need for businesses "to come on board" and understand the potentials of "win-win" scenarios that might -- unlike the Henry Ford model of product design -- require study of user behaviors and needs.  Her research group deployed mixed methods in their study, including desk research, interviews with mobile money providers, focus groups, and surveys of mobile money utilities, and used thirty-three university students.  They focused on 4,500 informants in Ghana and Nigeria from a population of poor urban dwellers earning less than $200 US dollars a month in Accra and Lagos.  The use of mobile phones was widespread among their informants, and "everybody has at least three phones," because the telecommunication infrastructure is such that "services differ in quality."  However researchers found that their subjects continued to use traditional local savings rituals associated with "susu" women, which has been a topic in other IMTFI funded research.

David-West described these bottom of the pyramid workers "not using mobile banking but using mobile money."  Although "banks are proud of what they are doing," according to David-West, the applications they offer are not significantly different from other phone-based services, such as paying bills for utilities and transportation, buying airtime, and sending and receiving money.  The two countries emphasized different regulatory models, including bank-focused, bank-led, and non-bank led, which in Ghana meant leadership by the telecommunications sector.  Researchers described low awareness and low utility and adoption in what was still a "cash-based society" suspicious of low agency networks that seemed affiliated with sorcery and even the forces of the Antichrist.  As they noted, earlier electronic banking products have not given people much confidence, and regulatory models were still evolving.  They closed by thanking their collaborators at  USC-CIBER. 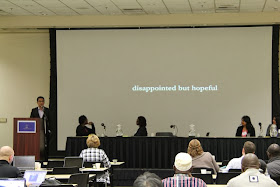 "The Use and Impact of Mobile Money in the Delivery of Conditional Cash Transfers in the Philippines" by Erwin Alampay and Charle Cabotaje focused on the 1 billion pesos distributed annually in the Philippines and the role of the GCASH program.  Alampay described himself as "disappointed but hopeful," based on his study of CCT conditional cash transfers, which represented the "global trend" that emphasizes providing money to women to promote educational and public health goals.  In 2010 there were one million beneficiaries; in 2014  four million recipients are projected. As transaction costs are going down, the situation appears to be offering opportunities to other vendors. 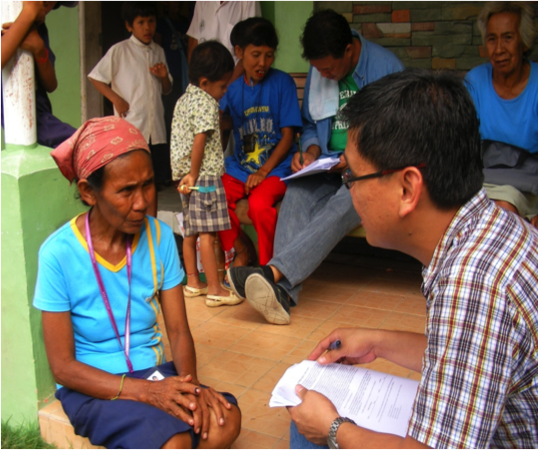 Alampay described the island of San Jose and the difficulties of the logistics of cash transfer in a region in which mobile money was not really used, because of unnecessary steps, including a requirement for texting to verify the identity of the person. Remittance merchant partners are limited by the number of people who can be served, and user experience is often characterized by long lines rather than the rapidity of "zapping money" described by Jenny Aker.  Researchers looked critically at the relatively high costs of smart money and argued that systems could economize if funds went directly to beneficiaries without the bureaucratic structure of intermediaries.  Most of the respondents were SMART subscribers from the bottom of the pyramid, who served as the more logical partners for the GCASH initiative, rather than the Globe customers, who were more affluent.  Researchers applied the "Stages of Access" model from the digital divide scholarship of A. J. M. van Dijk and explored the role of pre-existing knowledge and knowing those who use these services in their social network.  Often the benefits were not more apparent, and the systems were perceived of as not more efficient and not more secure.  The actual overhead costs are still largely unknown.  For example, a pawnshop was originally a top bidder for managing services, but they were unsure if the entire endeavor could be profitable. 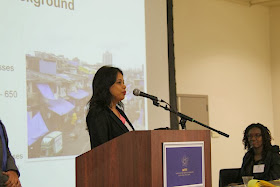 "Understanding the Movement of Cash of the Privately Led Enterprises in Dharavi and Scope for Electronic or Mobile Payments"  by Deepti KC and Mudita Tiwari examines global feedback economics occuring in one slum.  Researchers focused on the informal settlement of Dharavi in Mumbai, which has been profiled by National Geographic, and holds the status of being the largest slum in Asia.  In Dharavi researchers noted that there were more than 5,000 informal businesses producing goods worth 600-650 million dollars a year.  Because of the ethnographic nature of their approach, they sometimes encountered resistance from those engaged in illegal businesses.  They described interviewing 25 women who had engaged in transactions worth on average $626 in US dollars during the past month.  Of these women 68% had mobile phones.  They generally also had state issued ID and bank accounts.  Nonetheless, their mode of transactions was mostly in cash, although they sometimes used checks with suppliers.  Even when a bundle of notes was eaten by mice, business people still saw cash as more convenient and safe.  They also interviewed 115 clients and 20 suppliers and found that 75% preferred cash transactions as well.  They discovered that leather enterprises were particularly likely to use smart phones and to carry large amounts of money, up to three or four thousand dollars per pocket.  They noted that Abhyudaya Bank Co Operative Bank Limited was particularly popular among slum dwellers, because their client-centric approach extended to being open midnights and Sundays and allowing large cash withdrawals.  In contrast, the State Bank of India used conventional strategies, although they were mostly targeting migrants and relying on word of mouth.  All agreed that cash was perceived as convenient and safer option.  Researchers found low usage of e-payment systems in businesses, which saved on taxation and reflected a general mistrust of banks that extended to agents and ATMs. 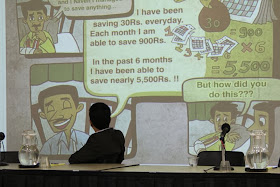 In exploring both scope and need, the researchers created a financial tool developed for a tablet to promote financial literacy with 2D animation.  After testing an initial prototype, they found that they needed translation into local language and stories that Dharavi residents could relate to.  By partnering with Neeti Solutions, they launched an interactive comic with six stories.  The stories included a scenario in which a health shock sent two characters to the hospital and consigned them to not working for a month; one patient had been saving, and the one had not.  In teaching about cutting back on non-essentials, researchers avoided preaching public health behavior or sounding too moralistic about saving to a population that saw it as easier to take a loan.

Discussant Carol Benson, Glenbrook Partners spurred recipients to explore some of the ironies.  The first presenters noted that marketing had done little to impact penetration, and that their informants had seen "the adverts" and knew "the jingles."  Rather than being a lack of knowledge, trust seemed to be an issue.  The final presenters also grappled with the problem of slum dwellers trying to decide what is "nonessential," since informants might say cutting back on food and medicine makes more sense to them than giving up songs on mobile phones or alcohol and cigarettes.
Liz Losh at 10:35 AM
Share