What is it like to live without currency in the 21st century? How could communities without legal tender and banking systems accumulate, store, and transfer wealth? Imagine possible mechanisms for managing wealth in a context where the social system is used in place of a financial system! That was our focus in this study. We explored the traditional non-cash modes of saving, storing, and transferring wealth in communities where social contracts have more prominence than cash. We analyzed the financial behaviors of people who live outside the conventional banking system, and how social contracts were used to manage wealth. 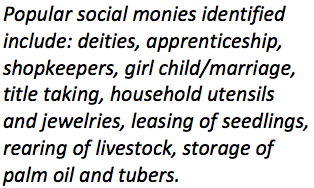 Social monies, as they are fondly called, are systems of shared obligations, rights, and relationships that entitle one party to perform an economic function for another. Values both economic and social are stored, saved, and transferred through social contracts, contributions, gifts, and donations to others which should be repaid in the future, probably through other means. Such social monies can be in the form of giving title, bride wealth exchange, contributions to ceremonies, giving of gifts during festivities, membership in clubs and groups, and land inheritance. As Sibel Kusimba (2013) and her team in their study on social networks and mobile money in Kenya observed, social relationships in rural African contexts are created through exchange of future values, debts, obligations, and a culture of entrustment in which future repayments are expected, especially during emergencies. Indeed, values worth millions of U.S dollars are exchanged daily in Africa using social monies despite the lack of formal currency.

These non- cash modes of storing and transferring value are still popular because they have socio-cultural symbolism. Users are attached to them because they are convenient, relatively stable, and trustworthy. Since social monies usage is culturally ingrained, new financial innovations such as mobile money which makes remittances easier and faster ought to alter community dependence on them. In the light of this, we interviewed, observed and through listening to people’s stories sought to determine whether mobile money adoption in these communities could alter their social monies usage.

We sampled 512 women from 23 rural communities in Southeastern Nigeria who live on less than US$2 per day. Although 99% of them own mobile phones, only 3% of them have bank accounts. We interacted with these women and their community/cooperative society leaders as regards various traditional non-cash mechanisms of managing wealth and the possible effects of mobile money adoption on them. Interestingly, 7 popular non-cash modes of saving and transferring wealth were noted.

Deities are major sources of borrowing and saving wealth in the area we studied. The words of chief priests are sacrosanct in financial matters. They have helped to shape the financial behavior of adherents. Deities through their priests safeguard the valuables deposited at the shrine, and also lend money to borrowers. The awe and reverence the deities enjoy among their adherents makes it possible for them to perform some financial intermediation roles. This is similar to what Kenneth Omeje (2009) observed in his IMTFI-funded research, Borrowing from the Gods. These deities through their priests perform debt recovery functions, insurance, financial negotiation, factoring, verification of claims, advisory and guaranteeing services. In recent times, some priests have taken it upon themselves to scale their operations by imbibing some formal banking practices such as advertising and documentation.

Items that have only economic values can be conveniently stored and transferred in cash. However, items that have both social and economic values cannot be stored in cash; that is the relevance of social monies. They are the mechanisms for storing and transferring both economic and social values simultaneously, as seen in apprenticeship, marriage, and title taking. The following quotes address each of these issues:

Adanna, a 22 year-old apprentice, affirmed, “I do not have any money now, although I work. Since as an apprentice I would be settled with a new shop and a large sum of money in a few years to come, my toil for 4 years is not in vain. I have stored a fortune for myself.”

Ngozika, a 54 year-old mother of four noted, “No one here doubts the financial benefits of having a girl-child. My in-laws take care of my monthly upkeep and training of my two younger sons. My omugwo (post-natal visit) is fast approaching in two months time and I am sure my wardrobe will change. I pity women who do not have girl-children.”The following explanation from Mmasi, a 34 year-old single mother, was very insightful: “Emeka, the shopkeeper in the village square, is my bank. I keep the proceeds of my palm business every fortnight with him. This is how I grew the capital I used to buy assets. I trust him because he is reliable and his shop is big and well stocked……..Even if he uses my money, he can conveniently pay it back.”

“Our family’s three years of savings and income were put into my husband’s title taking,” Mama Nneka, a 46 year-old user of mobile money, commented. “It is an important achievement for the family. Apart from social relevance, it is a dependable residual income. He is paid to take part in ceremonies and in dispute resolution. His share of money is kept for him even in his absence by various community associations. The title will be transferred to my son when he dies. It has lifted us above poverty and lack.”The introduction of financial innovations like mobile money would not alter their usage. Instead, it would strengthen it. For example, the marriage relationship, although social in nature, has economic offshoots. As a result, economic terms alone cannot capture the essence. 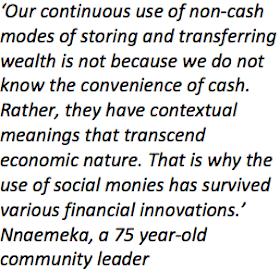 Mobile money can only store and transfer economic values and as a result, communities will keep searching for mechanisms for storing and transferring both economic and social values. The major weakness of social monies is illiquidity and lack of general acceptability. They are not easily convertible to cash, and can only function where trust and prior relationship, exist. This understanding is critical for designing financial products, and it could assist operators in knowing what people in rural areas would use mobile money for, and what they would not use it for.