Can I try again? Working with research participants as they map their networks


Our larger research work focuses on the deployment of mobile banking in changing practices of social protection for forcibly displaced families in Colombia. Part of our research entailed drawing family maps of our informants’ family practices of social protection. Methodologically, this involved two steps: First, we mapped members of the network and in the second step we mapped the different goods and services circulating within that network. The goods and services included not only money but also care, food, housing, etc. Here, we draw from our fieldwork experience to highlight some of the interactions between research participants and researchers engaged in the process.

We were interested in discovering the map drawing with our research participants in order to discuss different aspects of the maps rather than assuming them beforehand. Networks can be drawn using computer software which allow for homogeneity of representations, ease of navigation for spatial arrangement and rearrangement of nodes, and the possibility to build and manipulate layers of information. However, using computers was an obstacle for our participants, so we chose to work with hand drawn maps. Such a choice entailed a series of challenges and findings that we share here.

During this and other research endeavors, we noticed various methods to which research participants were already accustomed: for instance, being asked questions and their answers being recorded in paper or audio formats, and being asked permission to take pictures or videos of them whilst they go about their everyday lives. With these and other methods however, the stages of design and analysis tend to be carried out elsewhere: back home in researchers’ rooms or offices, discussing with colleagues or poring over their notebooks or computers. As researchers, we take our time in formulating problems, carefully crafting and often piloting approaches before we throw ourselves into fieldwork. We also take considerable time in reflecting upon and analyzing the information being explained. This can also be the case in mapping social networks that are used primarily as a tool for the researcher to interpret and convey her research findings. Our research departs somewhat from this model. Our approach encouraged an active involvement of participants in the elucidation and visualization of their own worldviews, as well as fostering an ongoing, joint reflection about findings. The rationale for an approach that places the interaction of researchers and research participants into central focus can be traced back to various theoretical and ethical considerations. These include participatory action research approaches giving prominence to the collective construction of knowledge and highlighting the transformative aims of scholarship (Salazar, 1992; Fraser et.al, 2004) as well as an understanding of explanation as something that does not displace people’s experience (Smith, 1996). But this post is less about our research methodology’s underpinnings and more about their implications while mapping networks. 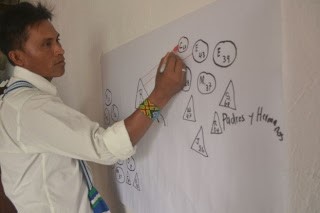 For the first step of mapping the members of the network we conceived of a set of conventions: circles for females and triangles for males, double lines for marital unions and lines stemming from such unions conveying offspring. The circle/triangle differentiation was easily incorporated by research participants and perhaps showed how ingrained such distinctions are. It was the other aspects of the exercise that presented difficulties.

For the first participant, we provided a sheet of paper (size A2) and colors for drawing her map. In this, some hurdles came up with handling spatial distribution: it so happened that either some members of the network ended up being cramped in a corner or just did not fit within the page even as a large part of the page remained blank. In response to this we changed our strategy which proved useful. We provided participants with a large piece of paper for practice so that they could get a feel of how the distribution could look like (see picture below). 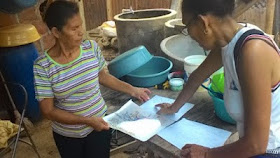 Other issues had less to do with practice and more to do with fitting the realities of their networks into the picture: if a widow remarries but keeps her connections with the family of her late husband, does she include both mothers-in-law? How does one distinguish between formal unions and those outside of marriage that have nonetheless produced offspring? What if a neighbor or friend, who is not part of the family, is actually quite important and ought to be included?

We realized that the practice of encouraging participants to have another go and include the adaptations they saw fit was quite productive. One woman, for example, devised a convention to distinguish formal unions from informal ones or those that were no longer operating. She used a crisscrossed double line (similar to this: ₩₩₩ ) to include another woman her husband had lived with during a period in which they were separated and from which he had other sons, and she used it to include the father of one of her grandchildren who never assumed his responsibility. Others came up with diverse solutions: participant ‘A’ organized different types of relationships in different sections of the map (siblings in the bottom left, nieces and nephews in the bottom right, children in the upper left) to allow for her friends to have a space in the upper right, whilst participant ‘B’ drew her connections towards different family units that were themselves organized around the woman in each family (her mother, her late husband’s mother, and her current husband’s mother). 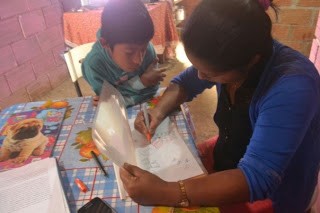 Our lesson was that, on the one hand, it was important for the participants to have many attempts, as it gave them the chance to ‘polish’ their work between drafts, just as researchers do. Additionally, this allowed for the sequence of attempts to be used as a resource: why does an estranged husband appear in the second, but not first attempt? Why do some members appear in more central positions in one draft compared to another? Such questions ended up being engines for further discussion. Rather than impose a correct way of doing things, giving participants leeway to adapt allowed for a more creative and richer grasp of their own worldviews. Such adaptations allowed for differences among the maps, instead of the homogeneity of results one would get using a computer program for this procedure.

We are, however, left with the question of whether these deviations stemming from reflections – as well as interactions between the researchers and participants- are to be located within the metric of the problem or as a resource in itself. This is a real question, for which we don’t have a set answer. If participant A in the example above aggregates types of relationships, whilst participant B focuses on family units organized in terms of couples and their offspring, this can affect both the sorts of flows being drawn and the interpretation of them. In the case of B one can see how a sibling with many children tends to receive more money than what he can give to others, and this is not something that would be as evident in A’s map. But insisting on the organization around family units could be an imposition on A, who may be telling another story: one in which personal relations with a nephew, for example, are not mediated by the sibling/parent but rely on the relation or affinities between the two specific individuals.

Going back to the parallel with network-mapping computer software in which centrality is provided by the flows in the network, in our research the centrality of a node in the distribution was based on the person’s perception. Thus, while the drawing of flows could eventually challenge the initial centrality given to a node (´look how many things pass/ don’t pass through this person’), this was not something that could be resolved by means of a straightforward formula. And this was so because we wanted to map different sorts of flows, which do not necessarily have numerical equivalents. Let us move on to discuss, then, the second step of our mapping exercises: the drawing of flows. 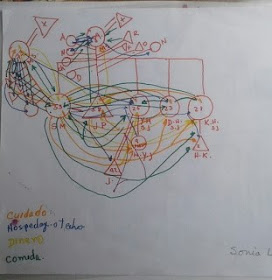 We began by ascribing different colors to the different sorts of goods and services flowing through the network: yellow for food, red for housing, green for money, dark blue for care and light blue for advice. To this we added an extra color (orange) to be used if the participant wanted to draw another flow that was not included in the ones we presented. Not all used it, but this extra provision turned out to be interesting. One participant chose to draw ‘union’ which for her denoted joint participation in festivities or everyday recreation and hanging out, while another drew ‘yahé’ — the traditional indigenous medicine through which he communicated and took care of his daughters. This signaled to us other sorts of interactions that pertained to wellbeing and a good life while highlighting that the components of such rituals and interactions were quite diverse.

Arriving at the most relevant categories in research tends to be an exercise of fine tuning between two poles that can be equally unproductive: too much abstraction and too much complexity. Too much abstraction can empty the map of the sort of referents that are meaningful for a person, or enforce the invisibility of particular dimensions—which has happened often enough, particularly when discussing the activities carried out in the domestic sphere. That too much complexity can also be problematic was a lesson, which became all-too-evident for us in this second part of the exercise. The design issues we faced in the drawing of goods and services circulating through the network were, again, both a matter of operational convenience and flexibility. For while including different sorts of flows could give us a more comprehensive view of the interactions in the network, too many flows could make the resulting map unreadable. Even without the extra color, our maps ended up being quite saturated and difficult to read (see picture above).

Fortunately, we had the opportunity to try again. Instead of drawing all the flows on a single sheet of paper, we used acetate sheets in order to be able to juxtapose layers. Adding and extracting layers gave us considerable room to play with. And it allowed for this to happen on site, with the combination of different layers becoming a resource for discussions with participants. In the end, there were iterative changes not only in the various attempts by research participants but also in the implementation of our methods (see an example of the outcomes in the pictures below). Trying again is an option that we as researchers were thankful for, and so were participants: for who hasn’t in general had moments and situations where they have thought ‘this is what I should have done’ or finished a conversation and after a while thought ‘Ah! This is what I should have replied!’

The interpretation of these maps began along with their crafting, and has not finished. We still have some work to do, including analyzing what these maps tell us about present views in the context of other fieldwork material we gathered about past and future perspectives of families’ social protection practices. We want to emphasize that drawing their maps was something these participants enjoyed (and so did we). Some of the pros discussed here—of the different attempts and on-site conversations during the map-drawing becoming a resource—could also be obtained in other contexts using computer software. But one thing to be said about whatever means chosen is that networks can help visualize not only quantities of flows but entire worldviews. And for the latter, thinking about the best way of harnessing participants’ abilities is key for their engagement.