Cashlite or Cashless? It Depends on the Financial Ecosystem

Cashlessness
Some say that the end of cash is in sight because we’re all going digital. Conducting financial transactions with cash has some perks like ease of use. However, it is also associated with problems and handling costs (see for example David Wolman's The End of Money). Therefore, going cashless – or cashlite - makes sense. In this blog on our research in Zambia, we focus on the form of cashlite-ness in which there is a transition to a more portable form of cash. Going cash-lite by introducing new cash denominations made sense in Zambia, which experienced inflation rates as high as 188% during the 1900s and early 2000s.

Introducing more portable cash
Going cashlite can alleviate some of the problems associated with cash. This is especially true in countries (especially in developing economies) burdened with large volumes of low-value currency notes because of high rates of inflation.

Transitions to a lower volume of cash can occur when people favor other forms of payment over cash. But another way to reduce the volume (and costliness) of cash transactions is when states introduce a new, higher value legal tender (currency), here referred to as “Cash2.0.” When higher value denomination notes are introduced, the volume of cash being handled decreases, while the value remains unchanged. This improves efficiency, and reduces costs and hassles. Switching to Cash2.0 means switching to a lighter (less bulky) form of cash.

In Zambia, high rates of inflation led to a number of difficulties with accounting and bookkeeping, keeping statistical records, and data processing software. The need for consumers to carry large amounts of cash created higher risks and inconvenience. It also increased the costs for technology and maintenance of banking and payment systems.
However, a 5-year period of much lower inflation combined with a more optimistic economic outlook and favorable macroeconomic conditions convinced Zambia’s Central Bank to implement a rebasement of the national currency in 2013. The process of going cash-lite in Zambia involved changes to the national legal tender summarized below:

Simultaneous Cashlite and Cashless Options: New Currency vs Mobile Money
Since going cashless and cashlite (via a currency change) both make sense, what happens when both of these are introduced to citizens of a country around the same time? Would the introduction of a more convenient form of cash make people less interested in cashlessness? Or, could the transition to cash-lite spur an interest in going even lighter, eliminating interest in the use of notes and coins altogether? To explore this idea, we examined people’s preferences for and experiences with the new currency and mobile money in Lusaka, Zambia shortly after the new Kwacha was introduced. 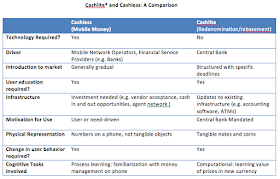 Data
Our main sources of data were:
Fieldwork was conducted for five to seven months following the rebasement. We asked individuals about their experiences, knowledge and use of the new currency and mobile money. Vendors were asked whether they accepted Mobile Money as a form of payment.

The new notes were perceived as easier to use than their predecessors. Unlike in other countries (e.g. Ghana’s redenomination in 2008, people experienced minimal confusion when encountering the new notes. Some interviewees suggested this had to do with the font and form of the cash value printed on the old Kwacha note. Instead of 10,000, the value was represented as “10000” with the last three zeros in smaller font than the rest of the value of the note. As such, our interviewees argued they were already used to ignoring the three zeros at the end of the currency, which were dropped in the rebasement. Similarly, the three zeros at the end of the currency were ignored in the local nickname for the old currency. In local parlance, 1000 old kwacha was referred to as 1 “pin,” 10,000 as 10 pin, etc. presumably because a bundle of low value notes were kept and “pinned” in sets of a 1,000 to keep track of large volumes of Kwacha notes. In this sense, there had already been a culturally driven rebasement of sorts in local representations of the old currency preceding the actual rebasement. In essence, the three zeros of the old Kwacha were being discounted long before the rebasement made this official. An additional factor leading to the ease of transition which one bank official noted was the fact that it was three zeros that were dropped during the rebasement, which differed from all other previous old to new currency conversion rates.

The rebasement included the re-introduction of coins to Zambia, which previously had limited use due to inflation. The general consensus was that while the notes were convenient to use and keep on one’s person, the coins were less so. A typical strategy people adopted to deal with coins was saving them for a rainy day. An alternative was to gradually learn or remember how to incorporate them into daily use.

It’s not a question of cashless versus cashlite - yet

More than half of our sample did not use mobile money (MM) in the initial period following the currency rebasement. Our sample’s MM users – who used the product mostly to send remittances - did not report a change in MM use post-rebasement.

Our data indicated that the initial slow adoption of mobile money was markedly influenced by:

At the time of data collection, most groceries and other consumer items that the average Lusakan purchased on a daily basis could not be paid for using Mobile Money. Apart from bill pay, only 2 of the 50 retailers sampled in malls, and none of the 100 retailers in markets sampled, accepted mobile money as a form of payment. However, some retailers mentioned that they were considering mobile money as a payment option in the future.

In the years since our fieldwork was conducted, mobile money has been marketed aggressively in Zambia. For instance, the company Zoona (http://www.ilovezoona.com/), interestingly a non Mobile Network Operator (MNO), has become a major player in Zambia’s mobile financial service marketplace. The harder Zoona and other Mobile Money providers work to enlarge the Mobile Money ecosystem beyond remittances and bill pay, the more likely it will be for the average Lusakan consumer to find themselves needing to choose between cashless and cashlite payment options. For now, the answer will be more retailer than consumer driven.

Read their final report here
Unknown at 8:43 AM
Share