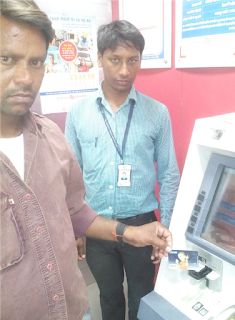 It was the sweltering summer of April 2016 and we were with a few microfinance clients of Utkarsh Micro Finance (one of India’s leading MFIs granted a Small Finance Bank license) near an ATM machine located in Harhua, a small town close to the city of Varanasi. The executives of Utkarsh led by Mr. Atul Tripathy were distributing the first set of pre-paid cards to some clients. The cards were loaded with their insurance claims. These five to six clients came from nearby villages located about 4 km away from the Harhua branch of Utkarsh. Except for one person all the others saw this M2P-DCB providing pre-paid card for the first time. In fact, none had never used an ATM card before. The executives explained to them how to use the card, how to withdraw their claim amount and helped them with inserting their PIN number to withdraw the money. We could see the anxiety on their faces. In fact, we were anxious too. The ATM machine dispensed part of the cash for the first client when the card was inserted. But since the claim amount was not a rounded number and the machine was not dispensing Rs100/- currency notes, the client was advised to visit another ATM machine to withdraw the full balance. The second case also had difficulty because the machine didn’t read the card in the first instance and only upon repeating the operation did the client succeed in getting his cash.

We had already interviewed several senior executives about this pre-paid innovation and were well aware of its background. Regulations by the Reserve Bank of India (RBI) mandated not to pay by cash to micro finance clients while settling death claims. Adding to this the Insurance Regulatory and Development Authority of India (IRDAI) mandated direct payment of the claim dues to the client and outstanding to the MFI, the master policy holder. Because many clients did not have bank accounts, payment by cheque or electronic funds transfer was out of the question. Many claim payments were stalled for a long time and many cheques turned stale since they could not be cleared by banks due to KYC mismatches. The option of mobile-based payments was also ruled out since it hasn’t taken off in general among the rural population. During our visits to Varanasi and nearby villages we saw sign boards of Airtel Money and Vodafone M-pesa but our interactions with the locals revealed very limited use of mobile money. Mr. Satyen Dash of Bajaj Allianz Insurance, Mumbai says, “There were difficulties in going for mobile phone-based solution due to issues of connectivity, non-possession of smart phones by poor people, KYC issues and the individual perceptions.” Hence came the idea of pre-paid cards as they comply well with the regulatory requirements of the RBI and IRDAI and pay the claim amount directly to the client. The process is illustrated in the figure below.

Our project moved further with a survey of 200+ MFI clients to elicit their salient beliefs and we also conducted a few in-depth interviews. Societal image and perceptions of enhanced financial security and hassle free claims settlements were the most important determinants for acceptance of the technology. Many of these clients benefitted from the use of cards since their claims were pending due to regulatory changes restricting the insurance company from settling claims in cash. A good number of cheques had also not been realized since these clients didn’t have bank accounts. Vodafone M-pesa has not really taken off in this region and mobile-based payments were almost non-existent. The primary use of mobile has been to be in touch with families and recreation/entertainment. Overall, absence of formal banking coverage, distance to ATMS being 3-7 miles, and difficulty in using mobile based payments have made the pre-paid card experiment successful in this case.

An interesting finding was that people often preferred soiled banknotes to new banknotes for fear of counterfeit currency. This emphasis on tangibility and trust based on physical signs of repeated use explains in part why mobile money has not taken off as a mode of payment and why some did not take as well to the pre-paid cards. A female respondent from a village near Varanasi said, “I don’t believe in new notes. The MFI agent once refused to accept them because the metallic part [the machine readable security thread and electrotype water mark] were damaged in the new currency note I had as part of  my fortnightly deposit. The new notes have not been used before and I don’t know if they are genuine. I think many of my friends share this feeling too.” Other beneficiaries felt that cards were better substitutes of cash. They felt that they could store their cash in this mode and use it as needed, which made them save a bit more in the process. The spouse of a female client said, “I think I overspend if I have cash. If I have money in my card I will spend when I need and save the rest.” This implies that employing card-based services for even collection and disbursement of loans by MFIs could be useful and could also serve other existing needs of potential clients.

Some design issues in this experiment also merit attention. The seven cases of settlement of claims by cards that we witnessed in our field visits were related to first time users of such cards. None of them previously had bank accounts or ATM cards. Though their perception of the utility of such cards was positive, one could see potential problems of using this new instrument. First, ATMSs dispensing cash belong to different banks and possess distinct display features. Second, the cards used in these machines are either credit or debit cards and the accounts too are of different types. Finally, the currency dispensed by the machine is sometimes limited to relatively high denominations. For instance, some machines do not dispense notes of Rs100/- denomination. In such cases some quick user guides for these pre-paid cards would help the users to effectively use the card. As mentioned earlier, claim amounts were not rounded off and the clients ended up losing a few Rupees in every transaction. If the claim amount was Rs. 5329 the machine would not dispense Rs. 29. But the MFI executives became aware of this lapse and there was an attempt to correct it in the next lot of cards by rounding off the amount to benefit the client.

It is also important to note that the level of insurance and financial literacy among these rural poor was very high. Most clients knew how much they paid for the insurance premium, the purpose of insurance, and how much was expected in case a death occured. They were also aware that due to some technical difficulties, their payments could get delayed. This can be attributed to Utkarsh’s financial literacy drive by executives specifically appointed for training clients in literacy. One example is that of a pledge taken by members at end of each meeting to adhere to the financial discipline of spending loan amounts on the activity for which it’s taken, paying the fortnightly instalments on time, spending income earned on family’s wellbeing, not applying for loan beyond one’s repaying ability and helping each other at bad times. The MFI representative also reciprocates by pledging to advance loans on time. 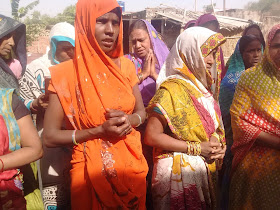 Is the pre-paid card based settlement/payment method sustainable in the changing environment of MFIs in India? Are MFIs fading away or are their roles shifting since some of them have been granted Small Finance Bank (SFB) licenses? These are some of the questions that remain. So far only eight MFIs have been issued SFB licenses by the RBI and others may follow in future. A majority of them will however probably continue as MFIs of small & medium sizes with the use of not very high-end technology. Pre-paid cards seem to fit that bill and may be well-suited to providing services like disbursement of loans and collection of repayments in addition to insurance claim payments discussed in this study.