In IMTFI's PERSPECTIVES blog series, IMTFI’s International Board members and affiliated researchers take on the definition of financial inclusion. This series aims to foster an open dialogue on issues around money, technology, and financial inclusion for the world’s poor. Individual contributions reflect contributors' own reflections on recent events based on their research and areas of expertise. The topic of financial inclusion will conclude with a capstone white paper by IMTFI titled "Mobile Money: The First Decade."

Samar Hasan of development finance nonprofit Karandaaz and founder of a new social enterprise start-up, Epiphany, opened the workshop talks on a startling note: She asked the audience of approximately 200 who knew what “financial inclusion” even meant. Only a handful raised their hands. As a communication head at Karandaaaz, Samar Hasan has been actively engaged in raising awareness on digitization of finance in Pakistan. Later on, Fawad Abdul Kader and Zain Khalid Bhatti of Bank Alfalah, a Pakistani Islamic bank, emphasized that even for those within the banking and finance industry, “financial inclusion” can take on a variety of different meanings, and be understood through varying perspectives. Subsequent conversations examined potential risks of financial inclusion, including new zones of exclusion or precarity and new vulnerabilities that digital money users might face. As a banker in Bank Alfalah, Fawad Abdul Kader made a distinction between the conventional bank and a retail agent. According to him, “Banks function under a controlled environment. Every transaction is controlled by a dual verification, whereas retail agents are relatively operating freely in financial circuit. Retail agents work on their benefits and on their terms. You can control the agents. Now because of this, it is becoming difficult to convert accounts from retail agents to mobile wallets.” Kader emphasized the need to customize banking services according to the population segment. For instance, he said that there is no single financial product for agricultural workers, who are the largest labor force in Pakistan.

The development of mobile wallets will bypass the agent network, who work on small commissions of 7-8% per transaction. Mobile wallets will give the corporations direct access to the customers who, instead of storing money in their conventional wallets or pockets, are now being encouraged to store it in mobile wallets. The money deposited in mobile wallets is then lent to commercial banks with an interest rate, which then gets further distributed in loans at a higher rate of return. Mobile wallet companies such as Finja and Monet believe that the historical monopoly of banks over money will be finally broken with the advent of smartphones. Fintech companies expressed great optimism about the role of smartphones in digitizing money.

Speakers agreed that adoption of new services, products, or technologies is occurring slowly, despite their tremendous social potential (i.e. the uptake of mobile-based services for the empowerment of women). Shoukat Bizinjo, Head of the State Bank of Pakistan’s Information Systems Examinations Division, provided an overview of Pakistan’s evolving digital regulatory environment, including payment systems, electronic funds transfer, and IT security in the early 2000s, and branchless banking regulations in 2016. Even a single ATM machine, Mr. Bizinjo noted, depends on complex, interrelated infrastructures implicating an array of regulations. In his presentation, he explained the Payment System & Electronic Funds Transfer Act 2007 issued by the Government of Pakistan. According to Bizinjo, the law allows the government to “inspect the premises, equipment, machinery, and apparatuses” of any financial institution involved in funds transfer. The law gives broad power to the government to legalize and streamline payment systems for greater “efficiency, safety, and reliability.” However, Bizinjo particularly highlighted the fact that the “central bank strongly recommends safety and security over efficiency.” In a neoliberal age of speculative finance, in which money and capital have been increasingly transformed into an immaterial reality for the sake of efficiency and speed, the state's responsibility for ensuring the safety and security of money becomes the top priority, at least in theory. Bizinjo also highlighted a regulatory framework for branchless banking which is rapidly growing in Pakistan. In short, the role of the central bank in regulating, controlling, and surveilling money circulation was the central concern of the presentation.

Muhammad Imauddin, a leader in microfinance policy at the State Bank of Pakistan and head of the National Financial Inclusion Strategy Secretariat at the State Bank, pointed out that the Finance Ministry’s 2015 national financial inclusion strategy reflected its commitment to the sector’s growth. In other words, Pakistan’s regulatory sector is amenable to financial inclusion, but infrastructure transformation takes time, due in part to the way that social issues are intertwined with regulatory concerns. Social issues affecting the work of regulators—but that require input from a variety of actors—include the longstanding exclusion of women from access to formal finance, and the distinct needs of merchants versus customers.

Many speakers referenced basic mobile phones, smartphones, Facebook, and WhatsApp when discussing the prospects of financial inclusion. These tools and free platforms have changed the fabric of Pakistani life through their rapid uptake by millions. The financial inclusion products, tools, services, and platforms discussed at this workshop—along with appropriate regulations and risk protections—can be similarly transformative.

Keynote Speaker Dr. Asma Ibrahim, Director of the Money Museum & Art Gallery, placed this transformative potential in historical context through an overview of the evolution of currency and coinage, from the ancient Bronze Age of Harappa through the 20th century. Her presentation was extremely educational for bankers and anthropologists to understand how the shape of money continues to transform through various social and political eras and contexts. For instance, 16th century Mughal emperor Akbar replaced Kalma, the first principle of Islam, expressed as No God but God. Instead, he inscribed Allah Akbar Jalla Jalala (God is most Great, Eminent is his Glory), emanating from his newly devised creed known as Din-e-ilahi. Another noticeable aspect is how symbols disappear from the coinage. In 17th century Mughal India, for instance, under Mughal emperor Aurangzeb, the Arabic text replaced symbols on coins. This is due to the fact that Aurangzeb was a conservative ruler who found iconography against legal Islamic codes. One could actually read a social and political history of the region by reading the symbols, icons, and texts on the coins. Each coinage system represents an era, a social force, a kind of reminder of the past age. Her presentation gave an impression that money is a mnemonic device, or what Keith Hart calls a ‘memory bank,’ that stores personalized and collective memories. As a Director of the Money Museum & Art Gallery, Asma Ibrahim has masterfully curated a history of currency systems in one of the country's finest museums, located inside the State Bank of Pakistan, Karachi. 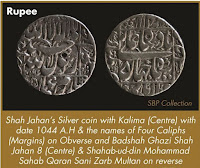 One thing that has emerged from the discussion with bankers and fintech practitioners is the lack of research on the financial needs of common people in Pakistan. They commended Habib University's efforts to initiate a conversation on money and finance, and they would like to see research become a bigger part of the industry. However, research for them is not social science research in which a scientist explores and critique social facts. Rather, practitioners want to see market research, which can help them to sell their products to the wider population.

Bridget Kustin is an international board member of IMTFI and Postdoctoral Research Fellow, Saïd Business School, University of Oxford

Noman Baig is also an international board member of IMTFI and Assistant Professor in the School of Arts, Humanities and Social Sciences at Habib University, Karachi.