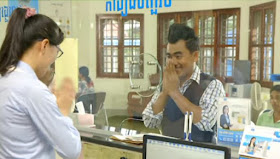 We show that television may be able to deliver rudimentary financial literacy in a cost-effective manner. In a controlled experiment, Cambodian garment factory workers were randomly assigned to one of three treatments: no video (baseline), slideshow and comedy TV show. After the intervention, to examine whether individuals were able to internalize the information that was provided, participants were asked to answer a set of questions on financial knowledge and attitudes. Our results show that participants randomly assigned to the comedy show are significantly more likely to report that they are interested in obtaining more information on savings accounts and are also significantly more likely to open a savings account in the next 6 months. This method of delivery may prove effective particularly for the disadvantaged sections of the population in remote regions of Cambodia.

--
Introduction
In recent years, mass media has penetrated large parts of the developing world with traditionally remote communities now having access to television and internet. It is argued that this could be used to achieve development goals: entertainment can have an educational role to play, leading to the term edutainment. Evidence from different parts of the world suggests that this is indeed the case.

In this article, we examine whether mass media can be used effectively to improve financial literacy and consequently foster financial inclusion in developing countries. Television may be able to deliver rudimentary financial literacy to those most disadvantaged in a cost-effective manner. The promise of broadcast TV is that the financial education it delivers may prove effective as it will be accessible, memorable, and entertaining to a large audience of those normally excluded from financial services, particularly those belonging to disadvantaged sections of the population and those living outside the major cities.

The Cambodian Microfinance Association (CMA), in conjunction with the research team, produced a 5-min comedy skit to be ultimately shown as prerecorded segment in a popular Saturday evening television show, one which is watched by 20% of the country’s population. The episode involves a storyline mainly focussed on concepts relating to financial knowledge, loan management and savings. An advanced video of the episode was shown to randomly selected garment factory workers during their lunch break. A second randomly selected group of garment factory workers were shown a financial literacy slideshow video, which covered roughly the same material, but did not have any comedy content. After watching the respective videos, the participants were asked to participate in a survey to collect information on their financial knowledge and attitudes towards different financial products. The results were compared to that of a baseline group, which consisted of a third randomly selected group of garment factory workers who did not watch any video, but participated in the same survey as participants in the two treatment groups.

We find evidence that attitudes to savings accounts were significantly different for those who viewed the comedy show compared to those assigned to the control and the slide show, without going into explanations for these differences. Furthermore, it appears that the video was more effective than the alternative delivery approaches in piquing workers’ interests in savings accounts.