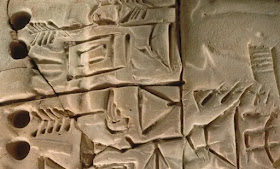 Richard Mattessich (1998) opened his paper in the Accounting Historians’ Journal on 3rd millennium BCE protocuneiform with a quotation from Leonard Bernstein: “The best way to know a thing, is in the context of another discipline” (Bernstein 1976: 3). For two weeks in January, 2019, a class of 114 undergraduate students at the University of California, Irvine, drew made-up protocuneiform tables based on Nissen et al. (1993) after reading Mattessich’s accountant’s perspective on them. They did so as part of a class on “The Future of Money.” The class is still going on, and is being conducted entirely online, except for an end-of-term in person meeting with a panel of payments industry experts and final exam.

Protocuneiform tablets were chosen as the earliest surviving examples of economic transactions utilizing a type of proto-writing that would later develop into the more abstract wedge-shapes of classic cuneiform.  The earliest examples date from the late 4th millennium BC (around 3200-3000), from the area of Uruk, and commonly include ‘pictographic’ signs denoting the goods being counted alongside numerals. (You can read more about ‘Proto-Cuneiform’ on the CDLI here and here.)


Split nearly 60%-40% between computer science majors and social science majors, the class read for two weeks on the origins of money—with video lectures in which yours truly tried to disabuse them of the received wisdom of money’s origin in barter, instead to foreground the importance of states’ administrative record keeping. The readings included some essays on tokens by Denise Schmandt-Besserat (including this interview) and parts of James Scott’s book, Against The Grain.

\Then the students engaged in a collaborative exercise. Mattessich in hand, they were tasked with drawing their own protocuneiform tablet representing a grain transaction, sending it to another student who would decode it for the next student, who would make a new tablet by adding to the original tablet and sending it to another student, and so on. The online format allowed for this kind of “do something and pass it on” structure: we used an online discussion forum on the Canvas platform that displayed threaded replies so that all the students could see what the others were doing and learn along the way. To make it more manageable, the students were divided into groups of 20-25, so each initial “tablet” went through at least 10 iterations. The whole thing took two weeks, with students responding as each new tablet or new decoding was posted.


Errors crept in along the way. Questions arose as to the placement of symbols on the “tablets” and the difficulty of dealing with a system in which zeros were indicated by empty spaces. Some of the students got a little frustrated. For the computer science students, this was not a typical “lab.” For the social science majors, this was also outside the norm for a homework assignment. Draw an ancient protocuneiform tablet, take a picture of it and post it online for someone else to decode? Pretty weird. But after the first couple of iterations, they really got into it.