Cash as a Public Good - the Expert View

Currency News™ interviewed IMTFI Director and Professor Bill Maurer and Dr. Ursula Dalinghaus about the role of cash as a public good and the IMTFI following the release of Cash Matters white paper, "Virtually Irreplaceable: Cash As Public Infrastructure", authored by Dr. Dalinghaus, affiliated scholar at the IMTFI.


Q: What is the main focus of the institute?

BM: We want to understand how people’s diverse interactions with money are being reshaped by new technologies, from new payment platforms to things like artificial intelligence in providing financial advice or in creating alternatives to traditional credit scores.

But, again this is crucial, we focus on the user side of the equation, on people’s actual interactions with money and these technologies, down to the level of questions like, where do they keep their money, and why? What does their daily transactional life look like? What are the diverse systems and beliefs that inform their money practices?

We developed the concepts of monetary ecology and monetary repertoires to capture this people-centered approach to money and technology. 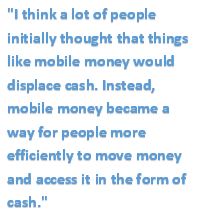 Q: IMTFI was initially funded by the Gates Foundation, major supporters of the Better than Cash Alliance. The IMTFI is neutral when it comes to payments; however, there is an increasing focus on cash. What caused this development?

BM: We realized pretty quickly that there were a couple of very general things going on, almost everywhere around the world.

First, most of the new mobile money systems in which the Gates Foundation was initially interested as potentially banking the unbanked were in fact serving as payment rails – not as means of saving but as a means of moving money. This made us focus more and more on payment systems as a distinctive area of research.

Second, pretty much universally, we found that new systems were not replacing old ones; they were instead being added into the mix. People would use one payment method for one kind of transaction, and other payment methods for others. But nothing was replacing anything else. I think a lot of people initially thought that things like mobile money would displace cash. Instead, mobile money became a way for people more efficiently to move money and access it in the form of cash.


Q: What is the key takeaway of your white paper on cash as a public good?

UD: That physical cash will continue to have a vital and complementary role to play alongside digital well into the future, not only as a method of payment but also as a democratizing force – an important form of power-sharing between issuer and user that is distinct from digital-based money.

One reason is that people value the ability to choose from multiple payment forms. Another, even more substantial argument for cash, is that the cash infrastructure serves a vital public role since cash can circulate independently of its issuer and it can work offline.

The Director of the IMTFI is Professor Bill Maurer, Fellow of the American Association for the Advancement of Science, Fellow of the Filene Research Institute, Dean of the School of Social Sciences and Professor of Anthropology at the University of California, Irvine. He will also be one of the keynote speakers at the ICA’s Global Currency Forum 2020 in Barcelona.

Dr Dalinghaus, Visiting Professor of Anthropology at Ripon College, is also an affiliated scholar at the Institute for Money, Technology & Financial Inclusion (IMTFI), University of California at Irvine, which has made itself a name as one of the leading institutes when it comes to the role of money in people’s daily lives and practices, and to the best way to go about financial inclusion.