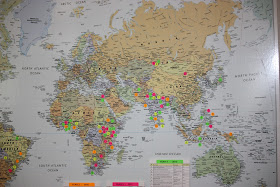 Roxana Barrantes Cáceres and Judith Mariscal's "Banking the Poor through Mobile Telephony: Understanding the Challenges for Expanding Mobile-Based Financial Services in Latin America" presented comparative work on mobile money that examined adoption patterns in a number of countries, including El Salvador, Guatemala, Paraguay, and Peru. Researchers looked at how experts' perceptions functioned within particular institutional frameworks that included the regulation of financial systems, the promotion of financial inclusion practices, consumers' protection advocacy, and telecommunications regulations.  They also examined market forces that included competition in financial and telecommunication sectors and innovation in telecommunications markets.  However, their project also included end user experiences of mobile money that depended on branchless banking infrastructure and deployment of agent’s networks.  In sum this matrix of institutions, markets, and end users indicated a need for different kinds of partnerships, because there were so many daunting obstacles in the Global South that inhibited change.  For example, ATMs had the highest levels of penetration in El Salvador, but even the most basic innovations in electronic banking had low penetration generally.  Furthermore, they argued that other aspects of the necessary environment for a flourishing mobile banking model had not been met, a point that they underscored by saying that the institutional environment may be easier in some regions but basic conditions at the notional level continued to be lacking.

In understanding how to overcome obstacles to adoption in Central and South America, the group suggested a specific case study in Mexico could point the way to success in the future.  Researchers studied a town with 2,0000 inhabitants in Oaxaca’s mountains with an 83% indigenous population. The site benefited from flexible requirements for opening a bank account (2009), the existence of branchless banking (2009), the interoperability of mobile banking platforms, a commission to lead coordinated financial inclusion efforts (2011), and the presence of government as a supplier of connectivity (2011).  Local initiatives also received a boost from some donations from a Chinese equipment provider.  The end user environment also benefited from an unusual degree of competition in banking services for a rural area: three services were present. TRE methodology correctly identified necessary conditions as follows: 1) business interests were aligned (supply side), 2) regulations were flexible (demand side), and 3) financial and technology education was promulgated (demand side). 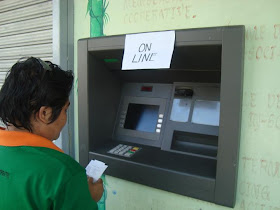 "Impact Research of Farmers' Access to ICT-based Decision Software on Household Savings Generation and Credit Loan Payments" by Allerine Isles of the Philippines opened with a stock photo to signify how powerful the hopeful imagery could be in financial inclusion initiatives, where mobile banking was like a red flower and the researcher was like an "excited child" in a scene of beauty and awe.  Although she understood the lure of such narratives, Isles implied that her critical mission to understand how mobile banking changes farmers might challenge such iconic simplicity.  She chose 111 farmer respondents from the Malapatan Multi-Purpose Cooperative and 112 farmer respondents from the First Consolidated Cooperative, communities that differed in their access to shipping and relationship to urbanization. (The image above comes from the Malapatan Facebook page.)

Isles described a variety of software services designed to improve the management of cooperative member finances and productivity.  She explained how Agri ICT Services include a nutrient manager, a crop manager available by 2014, e-Extension and Elearnng (ATI), and an agriculture and fisheries market information system.  (For more about the debate about how much market information promotes economic development, see coverage of the second presentation on this earlier IMTFI panel.)    Unfortunately, such digital regimes often overlook the importance of certain social functions of these cooperatives and how farmers understand their own group membership.  Furthermore, farmers' saving methods are still mostly at home, and borrowing is still mostly determined by informal loan histories.  Moreover, unplanned expenses, which might not be part of the digital model, continue to be the largest challenge to savings.  80% of the farmers she studied inherited their farms, and many also were reluctant to hire farm helpers, which might dictate crop choice.  As she explained, corn might associated with the supposedly “lazy farmer” while rice is relatively labor intensive in comparison. She also found a high demand for farm technical assistance, cultural practices in which farmer entrepreneurship not embraced, and complex savings and credit payment patterns.  The situation for farmers becomes even more complicated as they seek coping mechanisms to adapt to climate change.  Often TV, radio, and printed materials were where farmers look for information rather than on the Internet or mobile phones.  Based on her research, Isles insisted that access to ICT services was actually not correlated to the richness or poorness of area, and that many of her informants still prefer person-to-person interactions.  Thus, she observed, the relationship between access to ICT services and repayment capacity continues to be far more complicated.

Eduardo Diniz, Adrian Kemmer Cernev, Charlotte Guy, and Nathalia Moreira's "Mobile Payment Adoption in Brazil: Investigation on a Pilot Implementation"ended the session. Presenter Adrian Cernev, speaking for the Microfinance Study Center GVcemf, noted that it was his second time at IMTFI.  He described a landscape of 195 million people and 260 million cell phones.  He pointed out that 82% of people used prepaid services on phones, while only 45% had traditional bank accounts.  At the level of access to infrastructure, the move to mobile money makes sense in a nation with almost 100% cell phone coverage but a banking system that only covers the affluent parts of the country.  He focused on the case study of Banco Palmas in Fortaleza, which is not only an MFI but also a neighborhood association in one of the poorest parts of the country.  (Banco Palmas' official website is here.) 30,000 people live around the neighborhood, where researchers said they "do many things" and were urged to "buy inside neighborhood."  Many of the economic activities promoted are designed to further self-sufficiency, such as training to make clothes.  More than 50 community banks have emulated this model, and many actually have their own currency to keep consumption inside the community.  These internal currencies seemed to be an "interesting case" to pilot mobile payment systems.  In addition to commercial services provided by corporations, the main financial actors include the government bureaucracies that handle CCT or conditional cash transfer programs, which currently serve 30 million families or almost 40% of the population through the Ministry of Social Development.   (See the final paper of this IMTFI panel for information about CCT projects in another national context.)

Researchers studied contacts with different agencies and assessed the state of the pilot project today, which has 1400 registered users of whom 500 are active in a system with no mobile payment and no network externality in which people enrolled either from a security motivation or the pursuit of a free chip for one's cell phone.  Users adopted creative forms of appropriation in a system that includes the possibility to have two operators of a device and the availability of aggressive plans to make calls in cheap ways. Doing research was challenging, however, since the neighborhood study was "not a secure operation," and the team was "not able to bring cameras." With only four merchants participating, there might be "no significant use," but researchers wanted to examine the question of informal merchants' governance.  They also interrogated the expectations of the project, the timeline perspective, and the need to model conflicts.  For example, mobile operators like Vivo might want more market share, Redecard might want to channel conflict with the POS system, MasterCard might want to wait for the whole financial ecosystem to be mature in 15 years, Banco palmas might want social inclusion, and Caixa might want mobile banking.  They also noted operational failures when  interoperability was stymied by a closed system by design.  Ironically the team found that feedback to interviewed actors was one of the benefits to participating informants, since "they don’t talk to each other."  Thus it was actually the researchers who were facilitating communication in ways that addressed the governance gap.  Next semester the group plans to start data analysis, including group comparisons, by working with the Project ELAS database, information from Bolsa Familia women, and government data.
Liz Losh at 11:59 PM
Share