The Keys to Those Locked Out: Inclusion and Exclusion in Mobile Money Systems 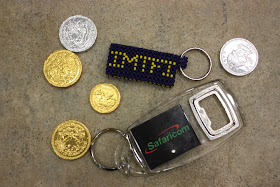 Keychains became important symbols at this year's IMTFI conference, which was apparent at the first panel of the second day, where participants could receive both a hand-made keychain from a Kenyan women's collective or a corporate keychain from Safari.com complete with bottle opener.  As the second day of discussion at the conference began, IMTFI Director Bill Maurer noted yet again the need for social infrastructure and the obligation to acknowledge resistances to mobile money and users' desires for the tangibility and substance of money as part of the lived experience of material culture.

Ndunge Kiiti and Jane Mutinda's "The Use of Mobile Money Services and Platforms among the Visually Impaired in Kenya: Any Impact on Poverty Reduction?" explained that it was "women who challenged us to look at this question" as they processed data from informants from 21 women’s groups devoted to economic and social empowerment.  Among that study there were fourteen women who were visually impaired, and Kiiti, Mutinda, and their collaborators noted some significant ways that they were different from their sighted subjects.  With “tons of data,” transcripts from interviews, and developing themes, the team found themselves reconsidering basic questions about inclusion.  Blind mobile money users were generally dependent on someone else, they had to give their PIN number away to make transfers, and they often encountered problems with unscrupulous agents as well.

This is important, because approximately one quarter of Kenya’s total population is impacted by disabilities, and 518,000 are visually impaired, according to the Kenya Union of the Blind. Only 21% of children with visual impairment attend school, and there is also a significant poverty-health link that perpetuates preventable problems with childhood blindness.  As the researchers noted, “Poverty and Visual Impairment are brothers,” and M-PESA services already tend to benefit those with higher economic status.  Rather than merely focusing on developing new technologies the researchers argued for also building "social infrastructure" and community education about how "disability is not inability."  Existing attitudes can perpetuate dependence that only worsens issues around privacy and access, although Section 54 of the Kenyan Constitution promises opportunity for the disabled.

Although mobile money technologies could be attractive the the visually impaired because of their affordability, promotion of independence and privacy, security, means to improve livelihoods, diversification, and support by policy, many obstacles remain, such as cost, the lack of autonomy of the disabled, their distrust and vulnerability to fraud, the difficulty of breaking the poverty cycle, network power, and the constraints of reality in practice, particularly when Safari.com largely functions as a monopoly.  However, researchers also noted that the disabled and the organizations that serve them have developed many workarounds, such as the soda caps being used for a Braille sign in one case.  Policy documents would seem to be on the side of more work to guarantee access and more creative approaches to implementation, which include the UN Convention of the Rights of Persons with Disabilities (2006), the Africa Decade of Persons with Disabilities,  The Persons with Disabilities Act of 2003 in Kenya, and documents from the International Labour Organization Convention.   Kiiti also told the inspiring story of Dennis, a visually impares M-PESA agent, and showed him doing work from his mobile money booth.  She argued that mobile money could be creating employment opportunities for the visually impaired as well as providing services for them. She and Mutinda also insisted on the need for effective partnerships and a multi-sectoral approach in order to adapt to frustrating and even impossible situations.  The pair closed with a student-produced video and discussed how they were engaging students at both their academic institutions.  The video,  "Addressing Poverty through Mobile Technology" showed testimonials from the Vinya wa Aka Women’s group and complaints about trying to address problems through technology alone.  Informants were relieved that they could avoid the trips to Western Union that could consume an hour of time, but found that just checking balance was difficult for the visually impaired, and basic services were priced higher than they were for normal users.  The video ended with the promise of better system and hope for better corporate engagement.

Rosina Nasir's "A Study on Association of Social Capital with Microfinance and Local Saving Programs among the Muslim Poor in Hyderabad, Andhra Pradesh, India" asked questions about the "trust" that resides in the financial inclusion model and contrasted the dynamics of self-help groups with groups designed specifically for microfinance initiatives.  As she explained, self-help groups emphasize the empowerment of women, their inclusion in the labor market, capacity-building, and social mobilization.  In India such groups have grown from the 500 groups in initial pilot projects in 1992 to about 8 million with weekly meetings and team leaders.  (For details about this history, see this report.) Other groups might place an emphasis on targeting savings not on the women themselves, although trust is responsible for less default and social concepts should be foregrounded, according to Nasir.  In the microfinance model, particularly the "classic five-member Grameen Bank model," she discovered self-selection and homogeneous groups, but trust missing in the paradigm building on joint liability that is primarily a business model meant to be profitable by reducing risk. Nonetheless, trust, shared knowledge, and reciprocity remain important, as are perceptions of social relationships at the individual level.  Nasir argued that it was important not to ignore theories of social capital, and she described in detail a case study of hurt feelings in which a woman's loan application was turned down, supposedly due to attendance issues, although the women felt dissatisfied with this explanation and awkward in social interactions with other group members.

Simiyu Wandibba, Stevie Nangendo, and Benson Mulemi's "Gender Empowerment and Access to Financial Services in Machakos County, Eastern Kenyan" opened by citing the research on gender of others at the conference and noting how this was clearly an important theme at the gathering.  Their findings seemed to indicate that "new financial service technologies embody gender differences." They listed research questions that included: how do MMT remittances and payment flow differently along gender lines in the study area, and what barriers does gender present?  Researchers showed areas  of competition in Kenya and the fluctuation in market shares generated by upstart companies challenging the dominance of M-PESA, such as Tangaza.  (An interview with Tangaza's founder is here.) Researchers noted problems with assuming mobile phone ownership when people may only have a SIM card or be borrowing devices.  Researchers focused on the Turkana and Machakos regions with purposive sampling 75 male and 75 female in each of three administrative districts.  At this point in the study they are working with information from 205 respondents of the 450 planned and have also designed the research study to include focus groups.  Anxieties remain among Kenyans using mobile money, particularly irritation at network delays and fears of fraud, and many were also afraid of registering SIM cards or sending money to the wrong person.  Unlike other IMTFI researchers who argued for a slower uptake of mobile money for novel uses, they noted the role of money in social maintenance, even by evangelical organizations utilizing SMS transfers.  As a general pattern, they observed that women received more transfers than men.  Customers reported reduced waiting times, fees lower than banks, and many convenient alternatives.  They liked the convenient, affordable, accessible, and instant way of accessing financial resources.  At the corporate level, researchers described how Safari still leads but other service providers have provided some fluctuation in the market, although they claimed that the whole system could be more efficient with a more level playing field.  In general, they found both negative and positive implications of mobile money use, including financial empowerment and social empowerment, which occurred at the same time as new role conflicts and social strains, particularly around perceptions that men were abdicating their responsibilities and engaging in secret transactions.  However, sometimes there are also improved family relations, as livelihood and security are supported.  Many women were also able to leave marriages in which they were unhappy, because mobile money allowed them to pay rent thanks to family contributions after a divorce.
Liz Losh at 2:52 PM
Share