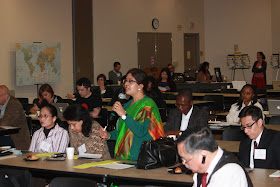 In the third panel at the IMTFI annual conference researchers described frustrations and challenges involved in the introduction of mobile money practices. Mani Nandhi and Deepti Kc's "Evolving Participatory Relationships for Uplifting Urban Poor Rickshaw Pullers: Next Step Forward" detailed the difficulties of rickshaw pullers living in illegal housing in slums, 95% of whom rely on informal methods, in moving toward the formal economy.  (Nandhi has presented research at prior IMTFI and appears in the photograph above.)  Researchers used the model of "action research" aimed at 50 pullers. She explained that her plan to implement and study financial change included providing rickshaw drivers with UIDs (unique identification cards) that were issued India government as a way not only to facilitate social mobilization but also to build trust.  After obtaining the UID AADHAR card, rickshaw pullers could open a mobile banking account, but pullers’ willingness to participate was extremely limited because of cynicism, disbelief, distrust. and lack of enthusiasm grounded in past histories of financial failure.  With the initial implementation plan, researchers found it took 61 days for pullers to get accounts that should have been immediately set up, and the first puller failed to deposit successfully  The CSP also lacked sensitivity, because they focused on markets for remittances not saving.  Field workers also had to deal with a range of chicken and egg problems among the dispossessed outside of the formal economy.  Thus they undertook a change in field strategy by linking with ICICI-EKO mobile banking, which allowed rickshaw pullers to immediately see rewards.  Nonetheless pullers still suffered from post-purchase anxiety, particularly given their desire for a familiar brand and the absence of ATM facilities.  She argued that this change in strategy in the "race to bank" was sometimes less like leading a horse to water and more like pushing mountains.