Don't Take the Money and Run: Architectures of Mobile Money 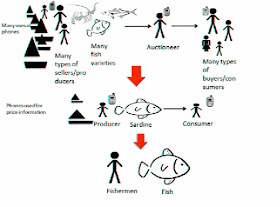 The final panel of the day "Architectures of Mobile Money: Constructing, Combining, and Converting Platforms" opened with moderator Gustav Peebles thanking the IMTFI for creating another kind of "bank" by making its database of research available.

The first presentation on "A Study in Tracking the Shift from Savings to Remittance on the Mobile Backbone: Findings from EKO, India” by Ishita Ghosh and Kartikeya Bajpai examined the partnership between EKO India financial services and the State Bank of India in relationship to initiatives to shift to mobile electronic money.   Researchers focused on how EKO could furnish a technology platform to interface with a public sector bank and gathered data from Cashpor and Saija  and examined four sites: New Delhi, Patna, Lucknow, and Varanesi.  Bajpai explained how working with 38 customer interviews, 13 agent interviews, information from 5 EKO representatives, information from 6 bank/MFI representatives, and observational data, researchers found that the driver is the MFI (microfinance institution) rather than the EKO customers, as they worked with a population of users represented by 26 men and 12 women of an average age of 33.  (Researchers were unable to find any female agents to interview.)  They also discovered that agents in their study earned 5000-30,00 IN, while users earned 1000 to 10,000 INR monthly.

Ghosh contrasted explicit and implicit needs-driven phenomena and emphasized the difference between one-time transactions and long-term transactions and also noted the need for providers to invest in outlays to promote financial literacy.   She also presented both success metrics and technology/process failures.  Customers might trust the lesser known EKO brand, the state bank, or the agent, but researchers also found situations when customers knew neither EKO nor the agent, but did a test run with a small sum of money and decided to commit to use of the service. For such customers it was much more difficult for them to test the savings products than the remittance products. There was also some SBI–EKO tensions around perceived non-completion of financial inclusion quotas by EKO and.EKO's perception of non-viability of financial inclusion efforts in some villages.  In understanding the SBI-EKO liaison relationship, researchers also found branch-level decisions to push customers towards EKO, even if banks were not technically allowed to refer customers to specific services.   By linking branches to the processing of payments, researchers found the the uptake of services could go beyond marketing individual financial products to the development of external relationships.  EKO cannot generate its own customer base, as a technology service provider, and therefore depends on meaningful collaborations with other institutions to do so.

Jenna Burrell, Janaki Srinivasan, and Richa Kumar presented next about "A Work Practice Approach to Understanding Actors in Agricultural Markets: Revisiting the Fishermen of Kerala, India."  As Burrell explained in introducing the project, the group's study was designed to test the claims of what has become a classic in the field: economist Robert Jensen's article "The Digital Provide," which focused on the cell phone not as a tool for mobile money but as a tool for the transfer of information, particularly price information that is variable and fluctuating but important for making decisions about trade.  Jensen argued that mobile phones allowed Kerala fishermen in his study to get a better price and bypass exploitative middleman.  However, Burrell described herself as somewhat skeptical of some of Jensen's claims, based on her own fieldwork in Ugandan fishing communities.  Jensen's article foregrounded a particular formula, in what Burrell granted was an "ingenious study," derived from survey data on fishing units that found prices stabilized.  Jensen's "parsimonious model" seemed to invite counterargument from more holistically oriented researchers using ethnography to apprehend more directly people's physical and social actions with phones.  Unlike Jensen, who works backwards form indirect evidence, IMTFI presenters talked to fisherman not to disprove the economic model but to put anthropology in dialogue with economics and introduce some "mess" in a seductive model that seems convincing and clear.

Presenters used a number of illustrations to show the variety of circuits of exchange in Kerala, such as the picture reproduced above.  While Jensen only studied sardines, researchers looked at a range of fish varieties.   Mobile phones first made their appearance in 1997, and Jensen focused on three districts in North Kerala, however researchers noted significant differences in shore geography (sandy vs. rocky), weather, and religion between southern and northern Kerala, which had consequences for the kinds of boats that were hired, the ownership models, and the roles of “producer and seller,” which were extremely diverse.  Even the variety of nets, hooks, and lines played a role in fishing prices and economic success.  Furthermore, researchers noted that women were never mentioned in Jensen’s paper, despite the fact that gender could be important in evaluating the resources available for sellers.  Researchers recognized the investor/auctioneer as key actor, as a person who has invested in the boat and who might be less likely to try unfamiliar markets or risk novel arrangements in response to relatively small price differentials.  They also described various categories of buyers, including export agents, wholesale agents, fish vendors, and waste procurers.  Burrell's group also acknowledged the role of scavengers and church tax collecters as actors in the scene.  They argued that the use of broad categories of fishers and buyers obscures many low income groups and places limits on the imagination, so that a select set of ideas is turned into a system that validates existing SMS market-priced systems and discourages the development of other alternatives that recognize qualitatively different uses of phones and facilitate new ways of designing.  Conditions in North Kerala that Jensen used make it a special case, and there are problems with relying on aggregates and averages.  Check out Beyond Market Prices for more.

The day ended with Eric Osei-Assibey's fascinating presentation on "'E-SUSU' Operation: Can Mobile Money Revolutionise an Ancient Saving System Among Indigenous West Africans?"  Osei-Assibey described "susu," an ancient form of saving still practiced among low income earners in Ghana, particularly with small amounts of money from market women.  Susu operators collected the same small sum of money daily from market women and then returned the total sum -- minus a one-day contribution commission -- at the end of the month.  This system seems very rational for market women who don’t have time to leave their wares and have very little tolerance bureaucracy, especially since many such market women are illiterate.  The traditional system is also flexible for changing circumstances with a relatively quick turnaround time that provides opportunities for microsaving for the unbanked.  Of course, the traditional system also has many potential problems, including an overdependence on trust and the lack of legal recourse to deal with default or fraud.  After all, it does not involve any legal documentation, only a piece of card to record daily contributions.  Susu operaters travel on foot, bicycle or motorbike so financial services are also extremely limited in scope, and operators are prone to robbery or attacks.  In addition, inability to work due to illness by operators can impact many customers negatively.

Osei-Assibe argued that Rogers' 1962 work on innovation adoption or how ideas and technology spread through culture was improved by newer work on the innovation-decision process published in 1995.  (Diffusion of innovation is an important area in many fields.  Osei-Assibe presented a technology adoption framework that includes knowledge, persuasion, decision, implementation, and confirmation.  He collected data from traditional Susu users and from Susu operators, who were often surprisingly young because of the need to cover ground.  27.8 % of the operators had higher education, while most users seemed to have much lower educational levels.   Focusing on 10 local markets in Accra and 6 local markets in Kumasi, Osei-Assibe gathered data from structured questionnaires and focused group discussions.  He found that small collections were the norm of 50 cents to $2.50 a day.  He also found a high awareness of mobile money at a 83% level, 59% of the operators saw mobile money as a perceived threat.
Liz Losh at 11:23 AM
Share