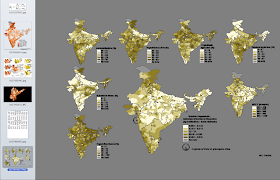 The final panel of the conference focused on "the Indian Case" to wrap up the two-day public conversation about money, technology, and financial inclusion efforts happening around the developing world.

"The New Information Ecosystem Being Developed Around Mobile Money: A Behavioral Analysis of Mobile Money Users in India" by Lakshmi Kumar noted that banking access remains at just 50% in India, while tele-density measures in at about 75%,  With migrants constituting about a third of the total population, and women constituting about 70% of migrants, Kumar wanted to ask why mobile money was considered preferable to bank accounts or post office money management.  She noted that address documentation was not required for mobile money, which could be important as migrants switch from rural to urban settings.  Nonetheless, numerous studies also point to greater confidence in "cash in hand" and suspicion of the role of middleman.  In comparison with other remittance practices, mobile money users sent more money, and those numbers increased with age and education.  There was also a significantly higher use among men.  Mobile money users also sent 34% more emergency money than non-mobile users, which also correlated to marital status.  She examined the practices of migrant workers who labored in professions such as construction worker or truck driver, who earned a relatively robust 14,000 rupees in monthly wages and were able to remit money back home frequently from weekly paychecks; she also studied non-mobile users, who tended to earn only about 6,000 rupees in her sample.  (You can see an account of Kumar's earlier work in Tamil Nadu, which was presented at the 2010 IMTFI conference here.)

Many in Chennai also benefitted from a what Kumar called a "sub-eco system" created through interventions by employers to facilitate electronic transfers to save time.  Money in this system went to bank accounts in the migrants' states of origin, and the receipt for the transaction would arrive in their mobile phones.  Thus mobile money users never wanted paper receipts, and trust was created immediately.  This factor of trust may explain why one product -- remittance -- gained so much trust in comparison to other products and services that could not be rapidly verified by kin.  Trust was also built through relationships with the people to whom they went to to charge their mobile phones and seek other services associated with mobile telephony.  This huge population of mobile money users could be part of a financial inclusion strategy that was "MNO & bank agnostic." Kumar also showed footage from a short film showing her informants that asserted that "remittance is the beginning of saving" and that the owners of stores pursued a marketing approach dictated by "pull" rather than "push" interactions.

"Spatial Complementarity of Mobile Financial Services, Business Correspondents and Banking Infrastructures: Accounting for Mobile Financial Services Ecosystems in India" by K.V. Nithyanada and Cyril Fouillet emphasized "speaking about space and financial inclusion," for example by showing a map of financial exclusion created from data from CGAP.  In beginning his presentation, Fouillet indicated his own scholarly debt to Susan Johnson and her work on financial inclusion in Kenya.  (See the Center for Financial Inclusion for more about related work.)

The Fouillet and Nithyanada team was doing the pilot data collection to support their visualization efforts by surveying banking correspondents, bankers, microfinance officials, and stakeholders at NGOs.  To better refine the indices of financial inclusion, they were producing maps at the district level for the entire nation and at the block level for Andhra Pradesh (Fouillet's field site) and Tamil Nadu (the field site of Nithyanada).  This ambitious mapping would also capture legal and regulatory environments and the landscape of the implementation of policy at ground level.  To make granular distinctions, researchers would like to deploy small electronic gadgets and operationalize business correspondents in India, although information from financial institutions would also include banking penetration, the available of banking services, and the use of banking services  Such visualizations could also potentially allow researchers to test hypotheses.  Researchers were still developing questionnaires and had not yet finalized sample size, but their recognition that money was a "highly political" commodity that merited the same kind of mapping efforts devoted to the state that might capture money in India in its "various dimensions." As they closed they cited  David Harvey, who famously argued that "money concentrates social power in space." 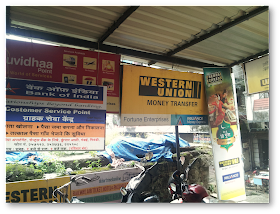 "One Among Many? Examining the Efficacy of Mobile Money in India's Remittance Corridors" by the extraordinary undergraduate student Amrit Pal noted that one third of all remittances occurred between two corridors -- between Bihar and Mumbai and between Andhra Pradesh and Delhi -- as mobile money users navigated between the aspirational extremes of the village and the city.  Pal described financial realities of migrants in satellite cities doing unskilled labor, such as rickshaw drivers and operators of manual handlooms.  He reminded that his research could only track the sending party, who constituted the more empowered users in the exchange, because they could choose channel and partner.

Pal showed the layout of space in establishments that offered mobile money services and the immersive branding of multiple remittance providers.  Although the establishment might be "one store" of "many purposes," remittance would be at "the heart" of the customer's visit.  From pitching the  Chennai Express to marking the festival of Eid, the visual appeals he showed often targeted a logic of rhetorical occasion.  He observed the importance of competition fueled by the kiosks and hawala discussed on day one of this year's IMTFI conference.  He pointed out that most transfers were immediately withdrawn at the bank branch as well.  Although he described a "vibrant ecosystem" with multiple products, he said that the reality be less "warm and fuzzy" than it might seem" because of "gaping systemic faults," which included "no clear mandate from regulators and banks."  There was also "no testing out of which channel that works" in an environment of hypercommodization and competition in which mobile money was treated like "detergent," and the customer purchased "the cheapest one that works."  Yet unlike detergent mobile money "may not scale."  Furthermore, agents might try to cut corners by going to the bank rather than through Eko, so that new corporate actors aren't given opportunities,  He also bemoaned the fact that "the largest bank had four mobile money products that essentially do the same thing."  In closing, he cautioned against "Big Brother" decisions and acknowledged that it was "not clear if mobile money will lead the way or follow the way" based on the lessons of the telecom market.

Discussant Abhishek Sinha, Eko India Financial Services Private Limited joked about the jargon of "econometric," "spatial," and "regression" in the abstracts of papers that ultimately turned out to be refreshingly plain spoken about research.   Sinha also raised questions about the use of middlemen - seeking higher positions while also granting that "assistance" served as "a big phenomenon in India," where people often spurned self-service, which may be available but not appealing from a "behavioral" standpoint.  During the Q&A there was a lively discussion that was spurred by the provocations of UCI Professor Alladi Venkadesh on the importance of making translations and not letting Western thinktanks control the agenda.

Bill Maurer wrapped up the IMTFI conference by emphasizing the fact that "the world has never seen the adoption of a single platform for money and value." He recounted his conversation with Carol Benson yesterday about mobile money as "a new rail" in an "interlocking system of rails" rather than "one whole system."  (Benson has a great post at Payments Views about the conference.)

Maurer cited Ignacio Mas on "bridges to cash," to state wryly that mobile money could also be "a bridge to cashlessness" or to the "cash-lite" state of Dzokoto and Imasiku or the "cash heavy" state imagined by  Scott Mainwaring.  He opened up his own wallet to show ATM receipts as "consumer protection devices" and threw a bill to the floor to dramatize the fact that "cash is not account based," "cash settles at par," "cash settles immediately," and that with cash "title passes to the bearer" even if we might debate whether the bill-throwing is a gift or a performance.  In grappling with much more complex phenomena described at the conference and "all the externalities in the cash cycle," Maurer reminded them that the moral picture could range from ATM fraud to the benevolent Njangi practices of Cameroon.
Liz Losh at 10:38 PM
Share