Trickling Down and Spilling Over: Social Organization, Power & Hierarchy 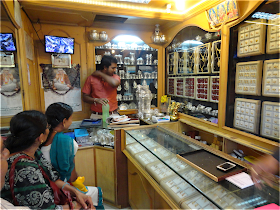 When I was in India this summer, the fact that I wore no jewelry save for a plain gold wedding band was perhaps the single most commented upon aspect of my appearance during my travels there. In "Silk Societies, Gold Stories: Using Gold-Based Life Stories to Study Gender, Financial Inclusion and Work Vulnerability in South Indian Sericulture," Nithya Joseph explained that -- in the case of gold -- "objects that don't appear to be necessary" may serve critical semiotic functions, particularly as a marker of class and caste.  In her study of political economy and worker vulnerability that used oral history as a method, gold objects served as significant markers of memory.  After twenty or thirty years, it was often difficult for informants to remember precise details of their financial histories, but aspects of everyday life were embedded in narratives about gold that allowed those interviewed to describe where they were in social hierarchies and how their positionality impacted their well-being. Oral histories were structured by a recounting of life cycle events, a learning/earning history, and narratives about gold-based possessions.

In choosing to focus on the role of gold for those involved in the production cycle of silk fabric, Joseph noted the common phrase that a sari goes "through a hundred and fifty hands."  She also observed that her field site provided a rich mix of participants from Hindu agricultures, Muslim workers involved in silk reeling and twisting, and caste-specific labor for weavers.  In situating the history of the silk industry, she reminded that it was already global when it was under the control of British colonial authorities, who were interested in capitalizing on sari production, as well as managing the relocation of workers in the silk industry.  Although Gandhian values of handwork and swaraj were still in evidence, the surplus generated by liberalization that could be highly disruptive with Chinese raw silk coming into the market and import tariffs being cut for mid-level entrepreneurs was generally invested in gold.  Based on surveys and participant-observation, Joseph collected many stories.  One informant described not eating for eight days and selling the gold owned by herself and her daughter to save themselves from debt so that her "ears are empty." Others moved from the labor back to the capital sector and doubled their gold holdings in the process.  She also found women using microfinance loans to buy gold that was then pawned to send money back to her village so that she could serve as a lender.  In short, Joseph gound capitalists able to hold gold ended up in a better place, while the gold economy could keep workers in debt. 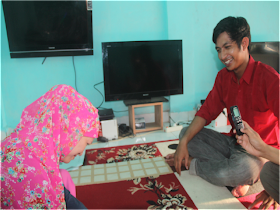 "Banking with the Patron: the Case of Patron-Client in Makassar, Indonesia" by Tiar Mutiara Shantiuli and Salmah Said describes hierarchical financial arrangements in a range of occupations, including cowhide crackers, proprietors of rental game centers, food hawkers, sea cucumber divers, and fried shallot producers.  Shantiuli focused on how patron-client reciprocity was introduced and how working arrangements were structured as well as initiated.  She noted that recruitment through kinship, neighborhood, or faculty mentorship shaped the hierarchy of patron-client relationships that generally began with borrowing in exchange for help.

Global finance, political Islam, and traditional cultural norms all played a role in "Mobilizing Religion as Value Storage: Islamic Microfinance in Bangladesh as a Model for Poverty Alleviation?" by Bridget Kustin.  Kustin presented a framework that focused on how Islam was being developed as a store of value in which particular forms of religious and economic subjectivity were inculcated, often through specific pedagogical interventions.  Her work focused on the Islami Bank Bangladesh Limited and its relationship to a complex ethics around financial participation in which Islamic microfinance existed in relationship to zakat (mandatory charitable giving), sadaqat (voluntary charity), and waqf, which was established by an individual owner of immovable property to fulfill in perpetuity any function deemed legitimate in Islamic law.  By focusing on the question "of how people self-identify as poor" and potential conflicts with how institutions make such distinctions, Kustin hoped to offer a richer picture of how people viewed their economic realities.  She also situated her work in existing scholarship about prohibitions against riba (usury/interest), especially Bill Maurer's book on Mutual Life, Limited: Islamic Banking, Alternative Currencies, Lateral Reason that noted that the term did not technically designate interest but rather "increase."  At the same time banks that promoted Islamic ideologies also had to consider the potential harms of non-engagement and the opportunity costs to investment, even as they tried to be scrupulous about avoiding gambling or trade associated with taboo behaviors designated as  haram.  She described how global Islamic finance was supposed to promote social justice, grow assets rather than money, and foster equity and the sharing risks.  She also was interested in the escatological implications of how people thought about money in relationship to time and to the future.  Among those with resources, they declared that "God will demand accounting of me," while clients without means might refer to how "God knows my suffering," and that all experiences could somehow be reconciled in a holy account book 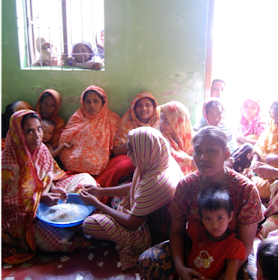 According to her interlocutors, questions of intent were critical.  Making intentionality explicit might also play a role in the global rhetoric of Islamic finance represented by documents such as the IBBL Mission statement.  All of these factors were complicated by conflict over political Islam in the country, including contestation about war crimes tribunals dating to offenses committed during the war between Pakistan and Bangladesh in the 1970s.  To provide more nuanced analysis Kustin chose Cox's Bazaar as a diverse field site that was multireligious and also showed how a stronghold of stronghold of Jamaat-e-Islami might include many supporters who were not radicalized and may pursue low-interest Islamic financing mechanisms purely for pragmatic reasons.   She also emphasized possible conflicts between the female empowerment favored by the Grameen Bank and the family uplift paradigm favored by Islamic microfinance.

"How does Mobile Money Affect Adopters' Social Networks?" by Alfredo Burlando, Cynthia Kinnan and Silvia Prina planned to study so-called "spillover" effects with a specific mobile money product, EZY-Pesa, which was developed through a partnership with carrier Zantel.  Researchers planned to focus on consumption smoothing, investing in health and education to reduce the shocks described by earlier presenters, and starting or improving income-generation activities.  Kinnan acknowledged a significant body of literature showing the mixed results of microcredit (Cerpon 2011, Augsburg 2012, Angelucci 2013, Attanasio 2011, and Banerjee 2013).  Furthermore, she said that she would not assume that if spillovers of savings existed that they would necessarily be positive, given the fact that people might avoid kin taxes (Townsend 1994) or shield cash from members of their social networks (Ligon 2002), much as earlier presenters depicted how Somali migrants used banks outside their own migrant communities.  The researchers also noted that these effects could be magnified by mobile savings.

With EZY-Pesa, they found that 50 households sign up per area on average and were able to create an experiment with 1700 recruited individuals.  The informed consent process also explained to those enrolled that they had a 50% chance of receiving help.  Thus, as Burlando elaborated the experimental conditions, half of the customers would receive marketing visit with Tsh 200 (about $1.25) placed in an initial deposit, while the other half would receive Tsh 2000 in cash with no assistance or advice.  As they progressed with the study, questions about trust were emphasized in the data collected via PDAs.  Researchers looked for four names and tried to identify altruistic and obligatory ties.  Then they asked interviewees to speculate about what they would do if they received a surprise payment.  Subjects ranked who they would want to keep this secret windfall from, from most to least urgent.  In their initial findings, they noted that obligatory ties tend to be rated at the same level of wealth and that altruistic ties tended to be close relatives likely to be in lending relationships.

Discussant: David Pederson, UC San Diego focused his initial questions on the assumption that "value" and "wealth" were really interchangeable and pointed out that the papers showed that this relationship was not necessarily as stable as it appeared to be in vernacular speech.
Liz Losh at 1:01 PM
Share