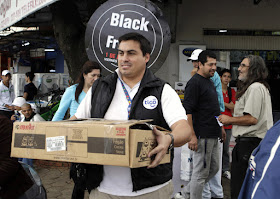 It was as brazen as it was spectacular: on April 24 2017, a commando team of bank robbers assaulted a private security company in Ciudad del Este, Paraguay, making off with US$11 million dollars.

Some dozen operatives, whom police believe were working for the Brazilian organised crime group First Capital Command, blew through the fortified offices of Prosegur, a company known for its fleet of armoured vehicles, before fleeing across the border into neighbouring Brazil.

The heist made headlines not for the relatively modest sum taken but for its dazzling Hollywood style. According to local papers, the team came armed with heavy weaponry and explosives, and 15 cars were set ablaze. The robbers escaped via speedboat, crossing lake Itaipú to reach Brazil. A private getaway plane was impounded by the authorities.

This dramatic scene fits neatly with stereotypes about Ciudad del Este, a Paraguayan commercial hub in the notorious Triple Frontera area where Argentina, Brazil and Paraguay intersect. It is one of the most active border economies of the hemisphere, and Ciudad del Este is often portrayed as its lawless capital.

At its peak in the 1990s, Ciudad del Este allegedly moved US$10 billion per year in merchandise – more than Paraguay’s entire gross domestic product.

The city even featured in the 2006 blockbuster film Miami Vice, the backdrop for scenes in which smuggled documents find their way into the hands of a network of baddies.

What it takes to build free trade

That reputation as Paraguay’s Wild West (or, better yet, East), though perhaps well earned, is also incomplete. Ciudad del Este is, above all, a laboratory for global free trade. As anthropologist Carolyn Nordstom has found, “a veritable smorgasbord of goods travel these (global) circuits.”

I spent two years (2009-2010) immersed in Ciudad del Este’s informal economy, conducting anthropological research on credit and commerce. My research shows that, far from being ungovernable, this Paraguayan free-trade zone is built on a sophisticated legal, commercial, and financial infrastructure that has made a small group of political and business elites very, very rich.

Ciudad del Este has prospered because of its unique legal and economic status as a duty-free zone (zona franca). All sorts of consumer goods, from digital cameras and sneakers to pharmaceuticals, are imported – both legally and illegally – and sold tax-free there.

Even before the city was founded in 1957, trade flowed across Paraguay’s porous land and water borders with Argentina and Brazil. The 1970 “special customs zone” legislation just gave that freewheeling frontier capitalism a legal and regulatory imprimatur.

Shopping tourists (known locally as sacoleiros, or “bag carriers”, for their large satchels of goods) come from Brazil or Argentina. And many international travellers drop in to buy affordable smartphones or imported perfume while vacationing nearby at the spectacular Iguazú Falls.

Inside, the bustling duty-free malls of Ciudad del Este, which are advertised on billboards lining the highways on all three sides of the border, look identical to those in international airports.

Read more and get to "the dark underbelly of free trade" in the full blogpost found at The Conversation here: https://theconversation.com/a-bank-heist-in-paraguays-wild-wild-west-reveals-the-dark-underbelly-of-free-trade-77125
IMTFI at 9:22 PM
Share