Valuing Migrants and their Money 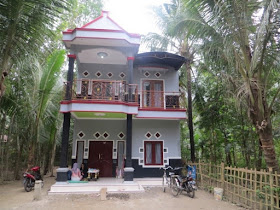 Migrants are often discussed positively in terms of their economic value and labor value to countries of destination and origin. In this blog post, I draw on my research with migrant-origin villages in Central Java, Indonesia, to challenge this impulse to foreground migrants’ “economic” motivations and contributions. I do so by highlighting the important ways in which ideas about appropriate gendered behavior, familial obligations, and religious piety, shape the value of migrants and their money. These ideas about gender and morality powerfully shape the transnational flows of migration. It explains why despite highly publicized risks and costs to migrants and their families in terms of finances, health, and mortality, hundreds of thousands of Indonesians continue to migrate annually.

In Indonesia, many programs aimed at improving the welfare of migrants and their families take the form of financial education programs, funded and facilitated by state institutions and foreign-funded NGOs. These encourage migrants—often with little formal education and living in rural poor areas— to finance their journeys from banks as opposed to borrowing informally from moneylenders and relatives, as well as send remittances digitally, rather than physically carry cash home. My project looks at the limited impact of these programs, by examining why migrants and their kin continue to take on many of these financial and physical risks. To do so, I examined attitudes towards migration more broadly, because they are intimately linked to how migrant money is valued, not only in terms of an economic exchange value, but also in terms of the gendered moral values associated with the production and circulation of money.

Like many other migrant-source countries, migrants’ financial remittances to Indonesia exceed foreign financial aid and investment combined. Indonesia’s six million migrant workers thus contribute significantly to the national economy, and are hailed in everyday and public discourse as “foreign exchange heroes” (pahlawan devisa). However, Indonesian state and recruitment agents promote migration not only in its economic promises and advantages, but also in terms of gendered, moral, and religious or spiritual development—such as representing migration in terms of carrying out a patriotic or familial duty.

In speeches by state representatives to women preparing to migrate, where women are given advice about financial behavior, their vulnerability to certain vices or temptations is emphasized. For example women are told to “resist” the seduction attempts of their employers, not be “wasteful or extravagant” by spending money on cigarettes, drugs, or “sit[ting] happily in clubs.” However, spending money on drugs or cigarettes is not framed in terms of migrants’ health, but in terms of reducing “the possibility that one can send money to families in the homeland.” In 2013, former chief of the National Agency for the Placement and Protection of Migrant Workers said, “Remember, if you consume too much, you will accumulate debt, and this isn’t good for your future, and your family.” Notably, such advice is rarely, if ever, dispensed to migrant men. Framing women’s migrations in terms of their familial and national duties encourages selective public sympathy and admiration only for migrant women who appear to conform to the normative ideal of a good Muslim mother, wife, sister, and daughter (See Chan 2014). But do migrant-origin villagers share such gendered evaluations of migrants and their money? What are the consequences of such evaluations? When I visited migrant-origin villages in Cilacap and Yogyakarta, dominant narratives and definitions of migrant success appeared predictable and standard: success was typically linked to migrant money, and status-linked indicators of being modern, such as fashion, the latest motor-bicycle, car, or concrete houses. Many told me that migrants should not return or should be “ashamed” of returning to Indonesia, if they have not yet saved enough money to bring home. Migrants do physically carry back as much cash as they have or can carry, up to as much as USD 5000. Villagers thus had very high expectations for migrants to both send money home regularly and save enough to bring home. For example, Diah was a factory worker in Malaysia for two and a half years. During this time, she managed to pay back all the debt she owed her recruitment agent (the equivalent of 9 full months’ worth of pay), and her remittances paid for her father’s medical operation, and her two younger brothers’ education. Nevertheless, she saw herself as a migrant “failure,” in comparison to other “successful” migrants who managed to return to buy land, build houses, and open shops.

Diah’s situation is the norm for Central Javanese migrants, where remittances may pay for everyday necessities, and migrants do not always return with large amounts of savings to build big houses and buy land, unless they had been working for more than five years. However, for migrant women in particular, their money was evaluated not only in terms of the houses or land it can buy, but in also in moral terms of how the money was earned or spent in socially desirable or undesirable ways. Even in cases where migrants do fulfil the checklist of what a typically successful migrant should be, they may still perceive themselves, or be evaluated by resident neighbors and peers, to be “failures” or “not yet successful.”

This is because narratives of women’s financial success often included suspicion or doubt about the source of such wealth. Such gossip might include how some women’s remittances were “not halal” (religiously forbidden), or “hot money.” Neighbors imply or explicitly speculate that these women earned extra money from sex work or received it from rich foreign boyfriends or extra-marital lovers. While there are women who do obtain wealth from these sources, it is very uncommon. Former migrants and non-migrants may make such judgments based on the way female migrants dressed when they returned, but sometimes such gossip may have no basis other than sheer incredulity that a woman can earn so much abroad. Scandalous stories in national media, or through informal Facebook posts online, which “expose” stories of Indonesians “trafficked” into sex work, or Indonesian sex workers in Hong Kong or Macau, encourage and perpetuate such stories and stereotypes. While the sources of migrant men’s wealth was never questioned, migrant women’s financial success was often suspect and associated with immoral means, unless they managed to maintain good reputations as respectful family members in the village.

A common example of a migrant failure is one perceived to not send or bring enough money home, that results in clear material indicators of migrant wealth. Diah, as mentioned above, is an example. In these cases, migrant men were accused of spending too much of their money on gambling, drinking, or commercial sex overseas— activities considered by most Central Javanese Muslims as associated with male vice and sin. These activities were seldom explicitly condoned by migrant-origin villagers in Yogyakarta and Cilacap, although they might be tacitly accepted or tolerated to varying degrees. As mentioned previously, migrant women were typically accused of spending their earnings on consumer luxury items, foreign boyfriends, cafes, or nightclubs. 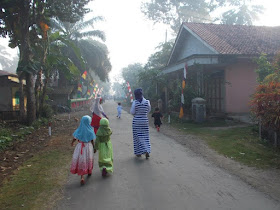 In these scenarios, I sometimes offered an alternative explanation for why migrants may not be sending much money home. Migrants might be paying off their debts to recruitment agents, who may charge them exorbitant interest rates. Some employers, especially in the case of female domestic workers, might choose to illegally withhold migrants’ wages, or in the worst cases, not pay them at all. In response, people often either shrugged off my suggestions dismissively, or reluctantly agreed that this may be the case. In general, migrants’ kin and neighbors, especially for those who have never migrated or attempted to migrate overseas, tended to downplay or not consider the financial costs of migration. They often expected that these costs would be quickly and rather easily paid off by the comparatively high wages abroad. In Diah’s case, for example, a non-migrant neighbour suggested that she was not able to save much money because she had been spending money frivolously on clothes and going out. This was despite the fact that she declared spending almost all her money on paying back her migration costs, and her family’s daily expenses.

Migrants are often labelled in mutually exclusive categories such as “economic migrants” or “refugees.” While such distinctions may be practically useful in contexts such as facilitating documented mobility, many scholars have shown that the “economic” is intimately part of social, cultural, and political contexts that give money, mobility, and other currencies their value. In different contexts of risky migration journeys, migrants’ aspirations for a better life is intimately linked to what they can gain from sending money home. Nevertheless, the very attempt to migrate with the intention to seek a better life for themselves and/or their kin is also socially valuable, where the risk of failure has significant consequences for migrants’ social position and respect.

Financial education programs and advice by the Indonesian state are not enough to address the question of why its migrants continually embark on risky journeys, and why not all manage to send or bring home much money. Instead, financial risks confronting migrants and their kin are strongly related to the broader migration industry with highly uneven processes and regulations, where borrowing money from an ill-reputed recruitment agent or carrying cash home can be perceived as only one among many “normal” risks entailed in migration. State institutions should begin recognizing that the problems facing migrant workers are not simply reduced to a few errant or “bad” recruitment agents and employers, or whether or not migrants are being frugal with their spending. Instead, the problems are institutionalized. Besides bargaining for better laws surrounding precarious labor, state, NGO and public programs about migration’s benefits and risks should focus on practical and infrastructural aspects of migratory processes, including remittance transfers, wage payment, and work conditions abroad, rather than questioning or applauding migrants’ financial discipline and moral character.