Continuing the conversation about “financial inclusions” in Latin America – onto Mexico

In IMTFI's PERSPECTIVES blog series, IMTFI’s International Board members and affiliated researchers take on the definition of financial inclusion. This series aims to foster an open dialogue on issues around money, technology, and financial inclusion for the world’s poor. Individual contributions reflect contributors' own reflections on recent events based on their research and areas of expertise. The topic of financial inclusion will conclude with a capstone white paper by IMTFI titled "Mobile Money: The First Decade."


"What I haven’t yet understood is what this business of financial inclusion is really about… and more importantly, is there anything new?"

This was the important question posed by Dr. Lourdes Angulo-Salazar at the end of the first day of the seminar, "Current Dilemmas Concerning Financial Inclusions," which took place in Guadalajara, Mexico on May 14 and 15, 2017. While it might seem to be a curious question to end with, there are two aspects of the ongoing dialogue during that day’s discussions that she captured with her intervention.

On the one hand, there continues to be a productive skepticism with regard to the explicit goals of financial inclusion and how these are informed by underlying objectives, whether in terms of governance, the favoring of particular financial industries - or both. Yet on the other hand, such doubts were also complicated through the variety of perspectives and case studies offered by presenters in the seminar.

“Financial inclusion” seems to be on everyone’s lips these days, in different countries in Latin America and beyond. But it means different things. For one presenter, financial inclusion implied an unquestioned policy target akin to bancarization, one predominantly envisioned as a vehicle for positive “economic and social development.” For another, financial inclusion was the problematic reification of social hierarchies through interest rates. A third presenter inscribed financial inclusion within a genealogy of failed development remedies prescribed sometime after the microcredit crisis, wondering whether “financial inclusion” is merely another diversion from more pressing discussions we should have about the need for structural change in our economic systems. However, other presenters discussed the ongoing need for financial inclusion in the context of an explosion of alternative currency projects in Brazil, or concerns about deportation policies under the Trump administration in the US. Without a reliable way to send their savings home, Mexican migrants increasingly fear that deportation could entail the complete loss of their savings, not only through physical deportation, but also through restrictions on keeping accounts remaining in the US in their own names, irrespective of whether they are in Mexico or the US. Given the complexity of these dilemmas, what financial inclusion is (or should be) about is far from settled, as Lourdes’ concluding question reminded participants.

Such lively discussions generated a great atmosphere for the seminar, organized by CIESAS (Center for Advanced Research and Postgraduate Studies in Social Anthropology), IMTFI, and the University of Geneva, with the aim of launching a regional IMTFI satellite in Latin America.

Participants included members of policymaking bodies such as Carlos Alberto Moya, Regional coordinator for the Alliance for Financial Inclusion (AFI) and Nancy Esthela Conde from the Central Bank of Ecuador, as well as academic practitioners such as Mariana Carmona and Isabel Cruz from the Mexican Association of Social Sector Credit Unions (AMUCSS) in Mexico, and Leandro Morais from UNESP (Universidade Estadual Paulista) from Brazil. Alexandre Roig from the University of San Martín in Argentina, Solène Morvant from the University of Geneva, Maria Elisa Balen from the National University of Colombia, Ursula Dalinghaus from IMTFI, Clement Crucifix from the University of Louvain in Belgium, and Enrique García and Magdalena Villarreal from CIESAS in Mexico rounded out the panels and provided a range of interdisciplinary scholarly perspectives.

In what follows, we highlight three key issues discussed in the event. (Presentations can be watched in full on the CIESAS Occidente channel of YouTube.)

1) Discrepancies between visions of financial inclusion 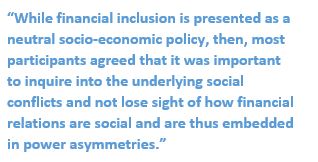 In the same vein, Nancy Esthela Conde, from the Central Bank of Ecuador spoke of her country’s efforts concerning digitalization and its effects. Ecuador has implemented a host of new financial services such as efectivo desde mi cellular (cash from my cell phone) as a means of payment and other monetary transactions. As of May 2017, more than 335,000 accounts had been opened through this digital money platform, and transactions totalled more than $8.4 million. She argued that government should continue promoting financial inclusion in addition to financial education and the protection of consumers’ rights. This includes constant improvement of security systems related to electronic financial services.

Leandro Morais also noted in his presentation the role of governments in the development of financial services. He highlighted how, in the case of organizations and services associated with the solidarity economy, different political views of successive Brazilian governments affect these processes in nonlinear ways.

Problematizing the notion of “a single financial industry and separate national spaces,” Isabel Cruz’s presentation concerning migrant workers in the US who are “sending money home” detailed calls for grassroots social banking. These efforts involve working closely with migrants to account for the specific contexts faced by this vulnerable population segment in multiple countries.

Presentations by Solène Morvant and Mariana Carmona, Maria Elisa Balen and Enrique García highlighted that beyond the usage of formal financial services–be they digital or not–populations in Mexico and Colombia continue to combine a plurality and diversity of monetary and financial practices. These are embedded in socio-cultural logics that do not obviously match the criteria for ‘modern’ financial practices. They find that instead of a narrowing of financial repertories, these new forms of financial inclusion extend them.

While financial inclusion is presented as a neutral socio-economic policy, then, most participants agreed that it was important to inquire into the underlying social conflicts and not lose sight of how financial relations are social and are thus embedded in power asymmetries.

Alexandre Roig made such relations explicit in his closing talk about state practices in Argentina, where the State plays a key role in improving access to financial markets for the workers belonging to the so-called “sector popular”.


2) The digital vs. cash frontier

One of the main issues traversing financial inclusion (or inclusions, as some of us would have it) is digitalization. Digitalization implies the deployment of specific infrastructures and a change in the cost of moving money around whose impact can be variable, as Maria Elisa Balen noted in her presentation. No less important, digitalization carries with it the idea of enhanced possibilities of intervention on account of the electronic traces that it produces. No wonder, then, that digitalization figured in presentations on subjects ranging from the practices of microcredit bureaus to geopolitical discussions.

Clément Crucifix reported on his ethnographic study of a credit bureau in a Mexican microfinance organization. He described how field staff spend most of their time looking at information gathered on borrowers displayed on screens instead of interacting with them in person. As a result, such information is subject to manipulation, sometimes in flagrant ways, by agents who are seeking to achieve their targets. At the same time, the credit information recorded in such platforms transforms subjectivities outside of the credit bureau. Thus, credit agents’ practice of seeking out ‘trustworthy’ people in the locales that they visit and asking them to refer them to others–sometimes even taking out loans for those others–engenders not only ‘financial creditworthiness’ as a new kind of capital, but also chains of influence that are used for electoral purposes. Digitalization therefore produces effects that extend well beyond the individual represented on the electronic platform.

Beyond the politics of digital accounting records, there is also the issue of money’s circulation in digital form. Ursula Dalinghaus talked about a new episode in the “war on cash” in the context of demonetization in India and the ongoing push to promote digital financial inclusion by eliminating cash. Drawing on differences in cash usage even in so-called developed markets in Europe, she noted how a preference for cash over digital money is not explained in terms of how ‘advanced’ or ‘developed’ an economy is. She highlighted how various factors influence cash-usage and preferences, such as past experiences of hyperinflation and economic change in Germany or household strategies in the informal economy in India, and whether or not people trust in the state or monetary institutions to guarantee the stability of value for the future. Beyond delineating arguments and available evidence in the digital vs. cash discussion, where a focus on money laundering and terrorist financing in relation to cash has become prominent, she called attention to the framing of the debate. Why is it that the coexistence of cash and digital money is now being framed as problematic and even coined in terms of a war between two sides? This question, just like the one concerning the "true implications” of financial inclusion, remains open. (Read Dalinghaus's white paper: Keeping Cash: Assessing the Arguments about Cash and Crime)

One of the aims of the Latin American regional research center is to create a space for dialogue between academics and practitioners on different forms of money and financial inclusion and the social relationships that these entail. The seminar was successful in laying a foundation for this dialogue with a participative and engaged audience.

The audience included a representative from PROSPERA, the national program for social policy, which oversees conditional transfers for the lower income population and other financial inclusion initiatives. Members from Financiera Nacional de Desarrollo Agropecuario, Rural, Forestal y Pesquero, and DIF (Desarrollo Integral de la Familia in Jalisco, one of the main social policy departments of the state government), were also present. NGO representatives, students, and researchers also participated in the seminar.

Through the IMTFI satellite we hope to continue these endeavors. We are interested in developing cross-disciplinary dialogues where complex theoretical issues can be discussed interactively with diverse participants, from practice-oriented researchers, to policymakers, to scholars, among many others. Such dialogues might take the form of panel discussions and seminars, or joint publications and other forms of dissemination. We are particularly interested in developing and organizing collective research projects involving different countries and diverse sectors of the population.


Magdalena Villareal is an international board member of IMTFI and senior researcher and professor at the Mexican Center for Advanced Research and Postgraduate Studies in Social Anthropology (CIESAS Occidente).

Maria Elisa Balen is an international board member of IMTFI and an affiliated researcher at the Universidad Nacional de Colombia.


Soléne Morvant-Roux is an international board member of IMTFI and Assistant Professor at the University of Geneva.